It was perfect outdoor weather on Sunday, July 31 as if ordered specially for the staging of the 10th annual Grace Jamaican Jerk Festival at Roy Wilkins Park in Queens, New York. A crowd of over 15,000 relished a day filled with fun, great food, and a variety of entertainment for the entire family, from the gates opened at noon. 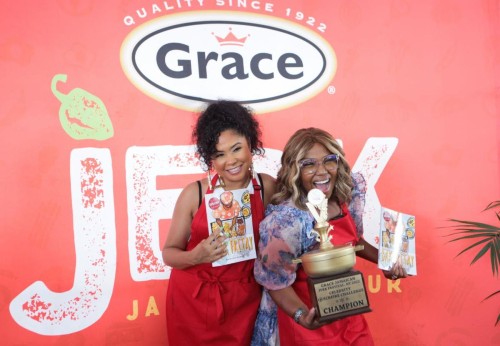 "We're very pleased with the results from the event," said Eddy Edwards, Marketing Director for the festival, "the turn-out was strong, the people seemed to really enjoy themselves, and the production came off without incident."

Participating food vendors enjoyed brisk business as patrons patiently stood in line to get their fill of authentic Jamaican fare, and other tasty delights. Queens based restaurant advocacy group Queens Together sponsored a "people's choice award" competition for selected restaurants at the festival with Ya Suh Nice from Jamaica, Queens taking home the trophy. The Grace Foods Best Jerk Vendor award went to Bowlden Trillz Restaurant from Brooklyn.

The cultural segment got the day started with performances by Asase Yaa Cultural Group, Nigy Boy, fashions by Mamayashi as ‘cultural ambassador’ Sharon Gordon schooled the audience with cultural facts.

There was so much to do for kids. Activities included arts and craft, face painting, family friendly games, soccer, cricket, tug-of-war, and they also had amazing adventures with black panther who made a heroic appearance.

Performances by dancehall hitmaker Laalee, Protoje and Lila Ike' added to the excitement, which also included Nadine Sutherland’s 90’s dancehall segment with Spragga Benz making a surprise appearance. DJs Platinum Kids and Sky Juice of Metro Media sound provided added musical entertainment to keep the audience rocking. The festival closed with a dual performance from Romain Virgo and Christopher Martin, dubbed "Singers in action," which proved to be festival favorites with fans as they sang and danced to the very end.