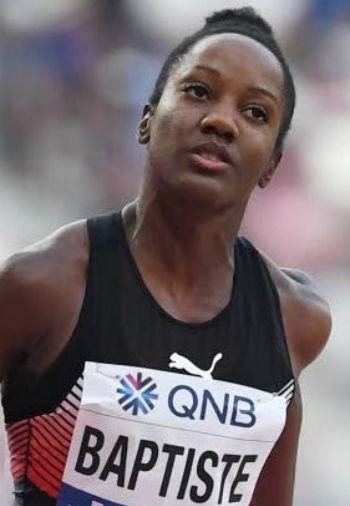 “Baptiste” But few attending were ready for the heat which greeted them at 2019’s top track and field meet.

“I’ve never experienced anything like this,” said exasperated Sylvia Williams, a Jamaican who attended the WCA to watch her son compete for their homeland.“… Brutal.”

Sept. 27 to Oct. 6, when the WCA was staged, is just past summer here. But it’s not quite winter. Well before noon on Day 1, for example, the temperature rose to 100 degrees Fahrenheit. A few hours before the evening start of Day 3, it was 109.

Organizers moved the meet from the normal July/August WCA window to beat the heat. They eliminated morning sessions. Still,Doha’s high temperatures and humidity were punishing.

“This is a different kind of heat,”said Bahamian David Charlton. “… They’ve elevated the level of heat here.”

Athletes admitted it was unusual to sometimes warm up for events in air conditioning. They took other precautions, but few chances.

“We train in the evening,” explained Jamaica 800 meters runner Natoya Goule. “It’s hot. I stay indoors. I don’t go outside if I don’t have to go outside.”

Coaches did their best by preparing “extra rehydration fluids …at the track and even when we’re at the hotel,” said Jamaica sprinter Sasha Lee Forbes. “And we have ice baths and stuff going on.”

But one Caribbean athlete embraced the heat, refusing to alter her routine.

“When you start trying to change things I think that’s where you go wrong,”said Trinidad and Tobago sprinter Kelly-Ann Baptiste.“… I personally don’t like to feel cold. So I’m perfectly fine in the heat.”

Meanwhile, some turned to humor, even style, to counter the heat.Jamaica sprinter Shelly-Ann Fraser-Pryce ran her 100 meters first round wearing bright yellow hair.

“The hair is a sunshine,” Fraser-Pryce said smiling. “… I hear Jamaica is hot. Doha is hot. So I’m bringing added sunshine.”

The innovative cooling system inside partially covered Khalifa International Stadium, where nearly all events were contested, made life comfortable. Outside, Caribbean spectators and athletes, who would normally wander about as tourists during the WCA, found Doha a beautiful city but a huge challenge. Daytime skies were often clouded in a gray haze. Thatmay have shielded visitors from the direct onslaught of the sun, which often looked blood red, but not the heat.

Yet visitors are expected to return to Qatar for soccer’s 2022 senior men’s World Cup. That tournament will be held Nov. 21 to Dec. 18, “wintertime,”according to locals, when temperatures “cool down” to near 80 degrees.

Fans who plan to come, may want to bring a fan.