BRIDGETOWN, Barbados – Three of the major tourism destinations in the Caribbean have given contrasting views on the impact the collapse of the British-based travel company Thomas Cook would have on their tourism product. 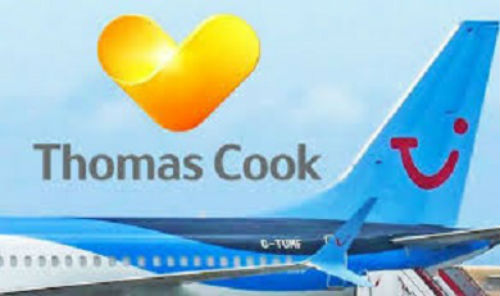 Thomas Cook, which had struggled against fierce online competition for some time and blamed Brexit uncertainty for a recent drop in bookings, declared bankruptcy last month after failing to secure £200 million (US$250 million, 227 million euros) from private investors.

“There are no passengers stranded in Antigua and Barbuda at the moment because that service operates only from November to April,” he explained. “But we have approximately 992 bookings that have already been on the books.”

James noted that while the nation enjoyed a good working relationship with the British-based company, passengers utilizing its services only represent a small fraction of the United Kingdom market.

“Last year for example, Thomas Cook did approximately 1,600 passengers to Antigua and Barbuda out of a total of 70, 670 from the U.K.,” he said. “So it is less than a half percent impact. So the impact will be very negligible.

“Also Thomas Cook comes out only from Manchester in the north of England and we have checked with our tour operators and also major hotels on island and very few did any major business with Thomas Cook. So most of that traffic appears to have been seat only,” he added.

James said that the airlift from the U.K. remains strong, adding “the U.K. numbers for the year so far are very strong, at the end of August we had 49,512  U.K. visitors, which is up in spite of Brexit” and other challenges.

Jamaica’s Tourism Minister Edmund Bartlett, who held talks with the British High Commissioner to Jamaica Asif Ahmad last month, was expected to lead a delegation to London late last month as part of the efforts to mitigate the impact of the closure of the company.

“We will be working feverishly over the next few weeks to mitigate the impact of it and to ensure that the fallout to our market will be minimized,” he said, acknowledging that the closure of the British tour company will negatively affect Jamaica’s tourism.

Bartlett said Thomas Cook was responsible for bringing up to 14,000 passengers to Jamaica annually.

“The impact on our tourism industry will be huge because they have long-staying guests averaging 14 days,” Bartlett explained. “When you multiply that, it is a couple hundred million dollars.”

In Barbados, tourism stakeholders acknowledged that the collapse would have an impact on the industry.

“We were aware of the company’s ongoing financial challenges for some time. It is a major blow to the industry to lose the world’s oldest travel company,” the Barbados Tourism Marketing Inc. (BTMI) said.

It said it was working closely with other stakeholders, including the Ministry of Tourism and International Transport and the Barbados Hotel and Tourism Association (BHTA), to minimize the impact to Barbados’s tourism business.

“Our first priority is working with the BHTA to facilitate solutions for the visitors currently on island who would have booked Thomas Cook packages,” the BTMI noted.

“While customers are entitled to refunds from the Civil Aviation Authority (CAA), we are committed to ensuring minimal discomfort and disruption to their Barbados holidays due to the fallout.

“It is estimated that there are currently only 44 Thomas Cook guests on the island, all booked through scheduled airlines and it is likely that they will not be considered as stranded passengers.”

Thomas Cook currently operates three flights to Barbados from Manchester in the winter, as well as a direct flight from the London Gatwick airport, providing a total of approximately 24,000 seats to the destination each year.

Condor, a subsidiary of the Thomas Cook Group, provides 12,600 seats through its summer and winter business to Barbados from Frankfurt. The 178-year-old company officially ended its operations on Sept. 22 after last-minute negotiations aimed at saving it failed.

The BTMI said it estimated that about 60 percent of Thomas Cook’s winter business to the island would have been booked in advance, and that it was already working on a strategy to assist any displaced passengers.

“The Honorable Kerrie Symmonds, minister of tourism and international transport, is already in the U.K. meeting with other airline partners who currently service Thomas Cook’s routes,” the BTMI stated.

The Barbados Hotel and Tourism Association (NHTA) has also expressed concern at the closure.

“The Barbados Hotel and Tourism Association is very concerned about the recent failure of Thomas Cook and its impact for the winter season when the service would be operating,” said BHTA Chief Executive Officer Rudy Grant, who was also part of the Barbados delegation in the U.K.

“Our initial discussions are concentrated on ensuring that we are able to secure the long-stay visitor arrivals that would have utilized Thomas Cook for the winter, but also to identify the possible options available to assist in the cruise-and-stay home-porting area as well,” he added.