PARAMARIBO, Suriname – Taking a stroll through the village of Kapasikele, by the sandy banks of the Suriname River, on a relentlessly sunny afternoon, a visitor may be struck that almost everyone encountered is a woman or a child. 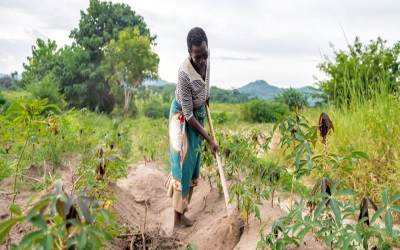 Women working to produce cassava in Suriname.Like many places in the interior of Suriname, Kapasikele is a place where a large proportion of the men spend most of their time away from the village, often working in the informal mining sector, while most of the women stay behind, making ends meet through farming or other traditional activities while also running their households.

And yet, in this Maroon village in the Brokopondo District, the women have a plan to take their agricultural production to the next level, and to leverage knowledge gained over years of producing cassava to tap into the tuberous root’s global value chain.

Through their association with the female agricultural cooperative, Wi! Uma Fu Sranan, the women, and others in villages across Suriname, are taking part in an Inter-American Development (IDB) project supported by the Japanese Social Fund to increase the quality, quantity and commercialization opportunities of the cassava crop for female farmers, producers and marketers.

“For the women of Wi! Uma Fu Sranan, the journey of learning about a value chain, the importance of a well structured value chain and being part of the development and strengthening of this chain is truly a blessing,” said Tania Lieuw-a-Soe, founder of the cooperative.

“We now understand better what it is like to work towards a sustainable source of income. There are many challenges, it is a rocky and hard road, but we definitely can see the light at the end of the tunnel, and we are happy to be part of this journey.

“We have the privilege of giving hope to women through the implementation of this project, and it is a big joy to experience how the training is giving them a self-esteem boost and the inspiration to do much more in agriculture.”

Lieuw-a-Soe’s sentiment was echoed by Vera Pinas, a participant in one of the training sessions.

“Today, I want to tell you something,” she said in a testimonial, “I am a 46-year-old woman and already working for 27 years, never before have I received a piece of paper in my hand, this paper which is called certificate and can be seen as a diploma.”

Specifically, the IDB project supports training activities for the women of Kapasikele, to improve their processes and meet market quality standards. In total, 700 women from Kapasikele and other villages will be trained in agricultural practices, including the use of modern technologies with an integrated crop processing model that coordinates variety selection, planting density, and mechanization, among other operations.

The women have responded with enthusiasm to the training opportunities, as well as to the opportunities for community development that they represent.

“Thank you for bringing this course in our area. We want more training to bring development in our community,” noted attendee Cornelia Bodji of a training session.

In addition, under the project, a select group of women will receive a Global Gap certification for their farms, while some beneficiaries will be in position to achieve the certification after the program ends in 2020. Armed with this certification, the women aim to export their cassava, either in its natural state or as an intermediate input to cassava-based products such as cassava bread or cassava porridge, which are exported to Surinamese diaspora market in places such as The Netherlands and the United States.

“We are very excited by the knowledge being created in these communities, though the training activities, the practical application of good agricultural practices and through the feedback that they will be receiving as they integrate into the global value chain for cassava,” said  Michael Hennessey, a specialist with the IDB’s Competitiveness, Technology and Innovation Division.

“We expect that the know-how being developed here will lead to more economic opportunities for the women of these communities, and a more diversified export basket for the country.”

Cassava is indigenous to the Latin American and Caribbean region. Its starchy tubers are often consumed boiled, roasted or fried, although they can also be processed and used as flour, tapioca, confectionary, starch and animal feed, among other uses.

It is naturally gluten-free, with a relatively high starch content, and is a source of Vitamin C and several B vitamins, as well as other minerals such as magnesium, zinc, calcium and iron.

While cassava is the fourth most important staple food in Suriname, after rice, wheat and plantain, it is the main food security crop for the Amerindian and Maroon communities, especially in remote areas.