Stranded in Caribbean By Virus, Some Face Frustration, Disrespect

*Junior’s itinerary, for his first extended return to Jamaica since moving to the United States early 2019, was booked solid. 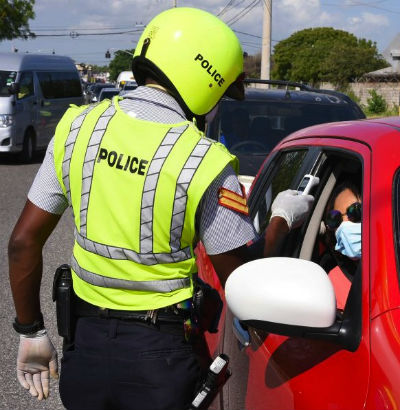 Police checkpoints in Jamaica attempt to limit spread of COVID-19.He and his wife had loads of family and friends to see; a sprinkling of business errands to run. The couple would celebrate Christmas in December, New Year’s in January, then Junior’s wife’s birthday in February, when she also had a function to attend. The rest of the time they planned to soak up the joys of home - sweet home - before returning to still chilly Georgia on Mar. 30.

Then, as Junior prepared to leave for the U.S., Jamaica’s government blocked travel to and from the island nation in an effort to stem the rapid spread of the deadly novel coronavirus (COVID-19). His visit turned sour. Junior spent most of his days in St. Catherine, a parish placed under lockdown after a COVID-19 hotspot was discovered at a call center, walking around his house. Anxiety, fueled by uncertainty, crept in.

“It’s frustrating,” Junior told Caribbean Today late April. “Sitting and waiting, wondering what will be next. We don’t know what will happen.”

He wasn't alone in uncertainty. While the precise statistics were unknown up to press time, it is believed that many Caribbean nationals who traveled from overseas - mainly the U.S., U.K. and Canada - are now stranded in the region due to government restrictions.

But while much was made about those in places like the U.S. being unable to return to the Caribbean, those stuck in the region remained largely unnoticed.

“I know quite a few people here who want to return (overseas) and can’t return,” said Junior, who re-booked a flight to Atlanta for May 30, but later learned Jamaica may extend its travel ban, which may force him to change the date again.

“But the Jamaica government seems to only talk about those overseas trying to get home.”

Teddy Bailey was also stuck. Bailey came to Jamaica on Mar. 18. He hoped to watch the Boys and Girls Championships, also known as “Champs”, possibly the biggest high school track and field meet in the world. He planned to return to New York by Mar. 30 to celebrate his young son’s birthday. A few days after his arrival, Jamaica halted commercial flights. There would be no birthday party.

“(My son) wasn’t too happy,” Bailey said. “We spoke every day and he kept asking if I’m coming back for his birthday. I kept telling him I’d be back. So it was hard when I couldn’t make it. For me and him it was a disappointment.”

Also frustrating was Bailey’s inability to enjoy his trip. Like Junior, he spent most of his time in Portmore, St. Catherine, a sprawling community just outside the capital Kingston. The call center fiasco led to stricter curfews. On the day he spoke to Caribbean Today, Bailey said Portmore had just finished a seven-day curfew, with designated times allowed on the street, and was facing another one for 14 days. By April 22, the day before the country announced it had recorded 233 cases of COVID-19 infections, Jamaicans were only allowed out between 6 a.m. and 6 p.m. Add tighter restrictions on grocery shopping hours and crowd gatherings and the self-styled “island in the sun” was suddenly no longer fun.

“The biggest frustration is that we’re on lockdown,” Bailey said.

It got weird outside too. According to Bailey, once he tried to get food, but police stopped him.

“The place was 200 meters from the checkpoint and the police would not let us get to the restaurant,” he recalled. “They said you were not allowed to leave Portmore and we were in Portmore. The restaurant is in Portmore. That is stupid.

“It’s very frustrating that I’m not able to move overseas,” added Bailey, who has “already programmed” his mind to leave Jamaica this month. “But I can’t even move around here. I can’t leave St. Catherine. Even in Portmore, I can’t move around … I’m just locked up inside the grille.”

Yet, for some stranded in the Caribbean, moving around may not be such a good idea. Reports surfaced showing people who live in the region verbally - and occasionally physically - abusing persons they believe came from overseas. They accuse them of “bringing the virus.” Some demand the “foreign” visitors leave, even though they can’t.

A Caribbean *man who lives in the U.S., but is now stuck in the region, recounted going to visit a longtime friend. The man refused to see him, telling him he should go into quarantine for 10 days first. That left him bitter. Caribbean nationals overseas, he said, are on the frontline battling COVID-19. Many have been infected. Some have died, while working to send money to support the region.

“So they (in the Caribbean) are still getting help from people who are suffering abroad,” the man said. “Yet still some of them disrespecting people, accusing them of bringing the virus.”

However, some in the region were outraged, admonishing their compatriots for such actions.

“When corona over and when some a oonu want foreigner fi come a oonu yard, a hope the foreigner dem don’t come a oonu yard,” an angry Jamaican woman said in a widely circulated social media post. “And when oonuwaanguh a Western Union (to collect remittances) or call foreign fi beg nuh money, none a demnuhfi send nuh money fi none a oonu out ya, because oonu ungrateful.”

According to observers, lines to collect remittances “stretched around the block” in Jamaica last month. Those stuck in the Caribbean have found themselves in need as well.

“You keep spending money you never planned to spend,” said Junior. “… You didn’t budget for all of that.”

“It’s eating up my funds,” added Bailey. “I didn’t plan to be in Jamaica this long. So it’s getting costly.”

The COVID-19 crisis has also sapped the joy of going home.

“I kinda have enough now,” said Junior. “Time to move. Everything kinda stale.”