Caribbean nationals in the United States are hesitating to embrace a return to normal as the nation re-opened during the coronavirus (COVID-19) pandemic, which had infected close to two million, killed over 100,000 and cost more than 40 million jobs through the end of May. 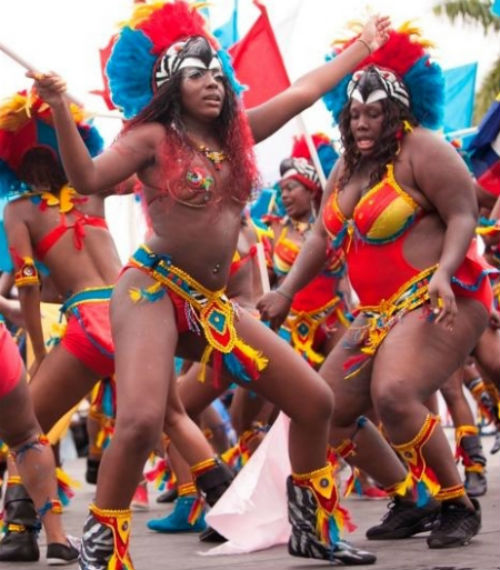 COVID-19 has left carnival plans in limbo. Photograph by miamicarnival.orgChecks across communities heavily populated by Caribbean nationals reveal they, like the majority counted in U.S. opinion polls, remain unconvinced it is totally safe to leave their homes for school, work, shopping or places of worship, even if they follow standard protective measures such as wearing masks, practicing social distancing and frequently washing their hands.

“There is this urgency to get back, but we’re still afraid,” Irwine Clare, a Jamaican American immigration advocate in New York, told Caribbean Today last month. “There are significant concerns.”

So much so that major Caribbean events, such as the Miami Broward One Carnival, scheduled for October, are still in limbo. According to organizers, they are “diligently monitoring” COVID-19 before making “a decision as to what our event will look like this year.”

The worry has echoed across other regions, some which continue to see a spike in infections.

“Yeah, we’re a little bit scared, because a lot of people are still trying to figure this virus out,” said Massachusetts-based Andrew Sharpe, president of the Authentic Caribbean Foundation. “… There’s hesitation towards re-opening.”

Official U.S. statistics were unavailable up to press time, but anecdotal evidence reveals a significant number of Caribbean nationals are among those infected and killed by COVID-19, especially in states like New York, Massachusetts, Connecticut, New Jersey, Georgia, Texas and Florida. Many contracted the virus while working in hospitals and nursing homes. That has heightened the concern.

“We have relatives and friends on the front lines,” said Clare, who lost a brother to COVID-19. “So they (Caribbean nationals) are cautious.”

The staggering number of infections and fatalities has driven fear into many Caribbean nationals, especially since certain states – Florida and Georgia among them – have been accused of fixing statistics to make COVID-19 infections and deaths seem lower than the actual number.

Public celebrations, like May 25 Memorial Day, were noticeably toned down in Caribbean communities. They’re also steering away from once-routine activities, including visits to beauty salons and stores, even as states relax restrictions.

“No, I don’t think so,” Jamaican-born *Andre M., a Georgia resident, said last month when asked if he would be getting his regular twice-a-month trim. “I think it’s too early. I desperately need a haircut, but I’m not going.”

President Donald Trump has pushed states towards re-opening, although no vaccine or cure is available. Trump is concerned a continued lockdown will permanently damage the U.S. economy and his chances at re-election.

In mid-May, the U.S. Centers for Disease Control and Infections (CDC) issued guidelines for re-opening. Yet many states didn’t meet all the guidelines before proceeding. That’s not comforting for Caribbean nationals, especially since they make up at least a third of the minority community in the U.S., which has been the country hardest hit by the virus.

“Data has shown that the black and brown community has been significantly affected by COVID-19,” said Sharpe.

Meanwhile, Dr. Anthony Fauci, director of the National Institute of Allergy and Infectious Diseases in the U.S., last month warned against re-opening states too early.

“My concern that if some areas - cities, states or what have you - jump over those various checkpoints and prematurely open up, without having the capability of being able to respond effectively and efficiently, my concern is we will start to see little spikes (of COVID-19 infections) that might turn into outbreaks,” Fauci told the U.S. Senate.

Still, states have responded by re-opening to varying degrees. In late April, Georgia Governor Brian Kemp allowed many businesses in his state, including barbershops, to re-open to the public. For Caribbean nationals like Andre M. it’s too much, too soon, especially since the federal and state governments were unable to test all U.S. residents for the COVID-19 and protective and medical equipment are still in short supply, even as reports of infection spikes continued.

“You don’t know who’s positive or negative for the virus,” he said. “Even if they seem negative now, they may become positive.”

The federal government has granted financial relief through multiple stimulus packages – up to $2,400 per couple depending on how much they earn. However, there is real fear the U.S. economy will nosedive further under COVID-19 and Caribbean nationals will be among those who suffer as businesses which employ or sustain them go bankrupt.

“We ought to do what we can to avoid these outcomes,” said U.S. Federal Reserve Chairman Jerome Powell last month.

According to Powell, nearly 40 percent of households, which earn less than $40,000 a year, lost jobs in March. By the end of April, the unemployment rate in the U.S. was near 15 percent.

Yet even while facing the dire threat of losing much needed income, Caribbean nationals have not been eager to hit the streets just yet. Many continue to work from home. Business owners, however, have mostly kept their places shuttered.

“(Caribbean nationals) recognize the economic situation,” Clare explained. “We have businesses that will never come back. But we are not eager to go out unless some systems are in place. There are significant concerns.”

For students, COVID-19 has forced them, for the time being, into classrooms at home. It’s not a permanent fix and already some schools are considering alternatives, knowing the virus could be around for years.

“So I think there are some creative solutions that we’re going to try to employ,” Trinidadian-born Dr. Wayne A.I. Frederick, president of Howard University, a predominantly black college with Caribbean students in Washington, D.C., told MSNBC television last month.

Howard is considering starting the fall semester later and ending it by Thanksgiving to eliminate at least a month of the regular flu season, according to Dr. Frederick. It is also eyeing establishing shared housing, which would allow specific areas for students needing isolation and quarantine, and limiting actual time students spend in classrooms each week.

The juggling act during the pandemic has become more complicated with reports of rising food prices due to COVID-19’s disruption of the production chain. According to the Bureau of Labor Statistics, grocery prices rose 2.6 percent in April, the largest hike since 1974.

Yet even if consumers have the money, food is becoming scarce during the pandemic. People are buying more than normally needed, leaving a shortage on shelves and forcing some grocery stores to limit the amount that can be purchased during each visit. High demand for limited stock leads to price hikes.

It’s not all gloom and doom, however. Caribbean nationals in some parts of the U.S. appear confident their local government is doing a fair job, despite obstacles.

“Yes, we are upset we’re not able to get the situation from a federal level,” said Sharpe, whose state of Massachusetts, he estimates, has more than 700,000 Caribbean nationals. “But we’re happy with our own state. We have that kind of spirit of champions.”

That spirit may be leading Caribbean nationals to respond in creative ways they were familiar with living in the region. Andre M., for example, said he “may wait a couple more weeks, maybe longer, or try to trim myself.”

For some, it’s back to a familiar road of hustling to survive - a life they thought they’d left behind in the Caribbean.

“I see people out there taking risks,” Clare said. “… Some people see the pandemic as an opportunity. The typical Caribbean person may be better equipped to handle this adversity (COVID-19)…