Senator Shirley Nathan-Pulliam and Dr. Basil Buchanan Recognized for Contributions to the Diaspora 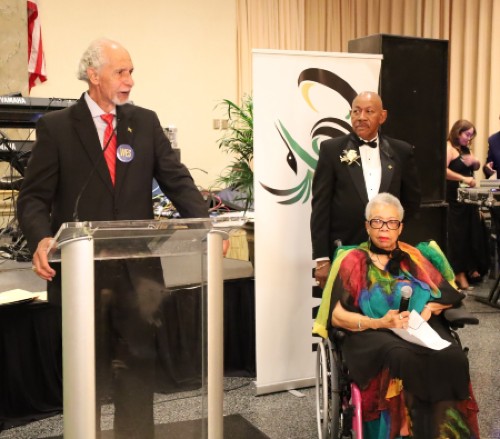 Honoree, former Maryland State Senator Shirley Nathan Pulliam (seated in the wheelchair) listens attentively as Ambassador Curtis Ward pays tribute to her. Also in the photo is the President of the Jamaica Association of Maryland, Mr. Rick Nugent who also paid tribute to the former State Senator who received the Association’s Lifetime Achievement Award. (Photo by Derrick Scott)Mrs. Nathan-Pulliam was in 1994 elected to the Maryland House of Delegates, as the first Jamaican-born and first Caribbean person to ascend to the Maryland General Assembly in its over 300-year history.

A Democratic member of the House of Delegates, she represented District 10, Baltimore County, from January 1995 to January 2015. In 2014, she was elected to the Senate of Maryland.

Born in South Trelawny, Mrs Nathan Pulliam, a nurse by profession, grew up in Kingston, where she attended The Mico Teachers College. She emigrated to the United States where she distinguished herself in the field of health care, before turning to representational politics in 1994.

Also recognized with the prestigious Marcus Garvey Award by the Jamaica Association of Maryland was Dr. Basil Buchanan for his over 42 years of providing invaluable support to the Jamaican community in the DMV and the Jamaican Embassy.

Among the things for which he is being recognized is his successful work to get legislation passed for the establishment of a permanent office on Caribbean Affairs in the government of the District of Columbia, a first in the nation.

The awards were presented at the at the Association’s Gala celebrating Jamaica’s 60th year of independence on Saturday August 13, at the Martin’s West Ballroom in Baltimore.

Jamaica’s Ambassador to the United States Her Excellency Audrey Marks, in a message to mark the occasion, delivered by Community Relations officer at the Embassy of Jamaica Mr. Emile Wallace Weddell noted that “Since lowering the red, white, and blue Union Jack and hoisting our esteemed black, Gold, and Green flag sixty years ago, Jamaica has experienced myriad successes in the spheres of diplomacy, arts, sports, academia, and entertainment.”

She said “We have produced countless firsts in a plethora of areas that have enabled Brand Jamaica to gain the recognition, acclaim, and credibility it deserves. 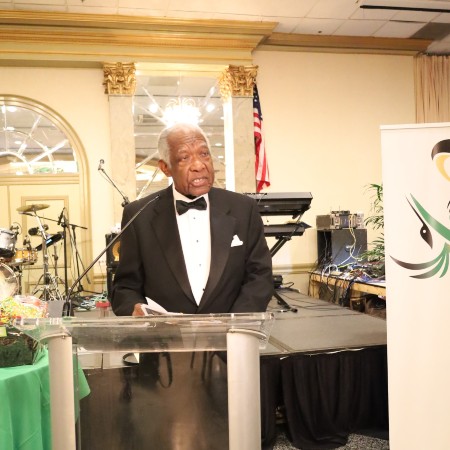 Marcus Garvey awardee, Dr. Basil Buchanan, expresses appreciation to the Jamaica Association of Maryland for honoring him with the Marcus Garvey Award on Saturday August 13, 2022, at the Association’s Independence Gala. (Photo by Derrick Scott)

“On the track, our athletes lead with prowess and continue to display their phenomenal record-breaking exploits. On the field, our Reggae Girlz and Boyz continue to shine. On the stage, our entertainers promote and share the vibrancy of our culture. On the international level, our leaders keep Jamaica visible, while doing their part to make our island and the world a better place,” she pointed out.

Ambassador Marks noted that “the past 60 years have not gone without challenges and thus this occasion also affords an opportunity to reflect and take stock of our progress and chart our way forward. Despite our setbacks, Jamaica remains strong, resilient, and democratic, with vast potential and opportunities to build our peace and prosperity. In this vein, we must take hold of our future.”

She paid tribute to members of the diaspora noting that “Our Diaspora is a critical element in our blueprint for nation-building and Diasporans continue to keep Jamaica close to their heart and soul. With a generous spirit, they have adopted schools and clinics, disbursed scholarships, and grants, donated medical and educational tools, and remain committed to our island’s development.”

“It is against this backdrop that I take this opportunity to express our heartfelt appreciation to the Jamaican Association of Maryland which continues to give sacrificially, volunteering time, energy and resources towards the wellbeing of the wider Jamaican family, both those at home and abroad,” she concluded.