Caribbean nationals, in the region, United States and across the globe, have joined the overwhelming chorus of outrage caused by repeated police killings of blacks in the U.S., marching lock-step with protesters and voicing out against racism. 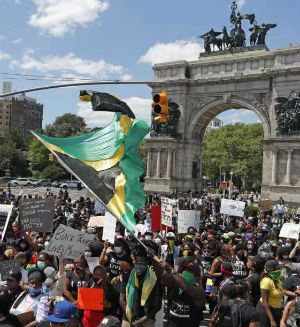 The Jamaican flag was prominent at Brooklyn, New York protest.In the U.S., where more than four million Caribbean nationals reside, they have been visible on the front lines of the latest confrontations between the Black Lives Matter (BLM) movement and law enforcement, which erupted across the nation following the May 25 death of African American George Floyd in Minnesota and continued for several weeks.

The protests in major cities, demanding police reform, accountability and supported by 74 percent of people in the U.S. according to a mid-June Washington Post poll, feature flags and songs from the Caribbean. Prominent nationals in the U.S. and elsewhere have publicly condemned what many believe are systematic racist attacks on blacks.

Caribbean nationals have also staged their own events against racism. In mid-June, for example, a “Caribbean Americans For Justice” protest march was held in New York, home to the largest Caribbean community in the U.S.

“This event will demonstrate Caribbean American solidarity with African Americans and other Americans who reject police brutality, racism and injustice,” Rickford Burke, president of the Caribbean Guyana Institute for Democracy (CGID), an organizer of the event, was quoted by the Caribbean Media Corporation (CMC) as saying.

Caribbean nationals’ presence has been prominent in states such as Florida, Texas, California, New Jersey, New York and Georgia. Several online forums, to discuss the issue of racism, have also been staged by Caribbean American organizations, using Caribbean American Heritage Month as a platform to vent their views after public events scheduled for June were shut down by the novel coronavirus (COVID-19) pandemic. 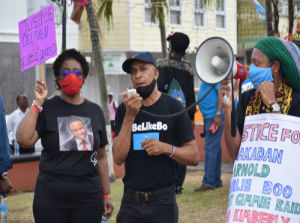 “A lot of Caribbean people went and walked with the Black Lives Matter protesters,” Andrew Sharpe, president of the Massachusetts-based Authentic Caribbean Foundation, told Caribbean Today. “They’re very upset about police brutality and racism … People are outraged and are venting their feelings.”

Retired U.S. Army General Colin Powell, whose parents were from Jamaica, also chimed in about the protests, criticizing President Donald Trump for his rhetoric and actions towards people of color, including immigrants, and describing how those views have irritated observers overseas, including the Caribbean.

“They see that these are demonstrations that are justified and not to be criticized,”Powell told CNN last month (see related story on page 5B). “… I’m the son of immigrants. I wouldn’t be here if my parents couldn’t come here on banana boats in the 1920s. This is America. This is who we are.”

The reaction to events spilled into the Caribbean, where nationals from there have been among victims of police violence in the U.S. 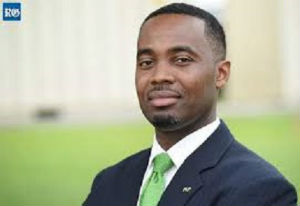 “Burt, David - Bermuda” Last month, people gathered in St. Lucia’s capital to participate in a BLM rally, demanding accountability for police killings. The rally was not authorized by the government, although Prime Minister Allen Chastanet said he supports anti-racism protest. The parents of Botham Jean, a St. Lucian gunned down by a police officer in Texas in 2018, attended the rally.

“My son suffered as a result of the color of his skin,” Jean’s mother Allison told the rally. “… So it touches my family, it touches my country, it touches my church and therefore we must stand in solidarity with George Floyd and the several lives lost at the hands of police or white supremacists in the United States.”

Prime Minister Mia Mottley assured Barbadians “that whether it is a march or not, this country is not going to support behavior that in any way reflects unfair treatment, discriminatory treatment or unconscious bias.”

Bermuda Prime Minister David Burt warned his his government would be seeking to pass laws that dismantle remnants of racism. 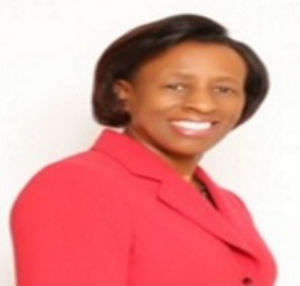 “I hope that all the white persons who are supporting and saying black lives matter and we have to end racism will not complain when there is legislation brought to this House to address issues of structural racism in this country,” Burt said.

Caribbean outrage also echoed in Europe. Jamaican-born Paulette Simpson, executive director of The Voice, a leading black newspaper in the United Kingdom, lashed out against racism.

“We have a society that is not equal and there is a certain group of people, namely the black people, who are not treated fairly,” Simpson said in a radio interview last month, “(and) are not having equal access that everybody should have.

The Caribbean’s cricket ambassadors also pledged to support BLM during their current tour of England. 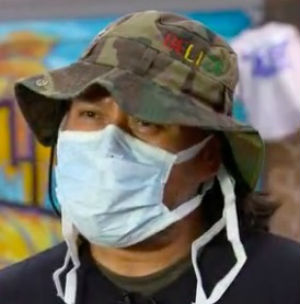 “Herrera, Cadix” “There needs to be equality and black people must feel as though they have a presence in this world,” captain Jason Holder told Good Morning Britain last month.

As they expressed horror at Floyd’s death, Caribbean nations admitted the issue of law enforcement brutality was also a problem in the region.

“While I join other world leaders in condemning this and other human rights injustices I am also sensitive and extremely concerned by similar injustices here in Jamaica,” said Jamaica Prime Minister Andrew Holness.

Most street protests in the U.S. appeared peaceful. Some were marred by looting, vandalism and violent clashes with law enforcement. Trump lashed out at protesters, calling them “thugs.”

However, the U.S. Embassy in Trinidad and Tobago said it embraced the “peaceful expression of solidarity” expressed by T&T citizens who protested Floyd’s death.

Caribbean Americans also spoke against clampdown in cities across the U.S. aimed at curbing protest marches, including curfews in places such as New York.

“This is neither the right moment nor the right process for imposing one,” said Jumaane Williams, New York City public advocate, whose parents are Grenadian. “… This is another example of black and brown communities asking for aid and receiving police.”

Colors, of another kind, also left an indelible mark on the protests. Cadix Herrera, an artist from the Caribbean community nation of Belize, was part of a team that drew an iconic mural where Floyd died in Minnesota.

“We wanted to make sure his name was remembered,” Herrera told reporters.