WASHINGTON, DC - Deputy Assistant Secretary for Caribbean affairs and Haiti, at the Department of State, Ms. Barbara Feinstein, has hailed Jamaican American nurse and US Presidential Medal of Freedom awardee Dr Sandra Lindsay, as a nurse giving hope to the world in a time when it was most needed. 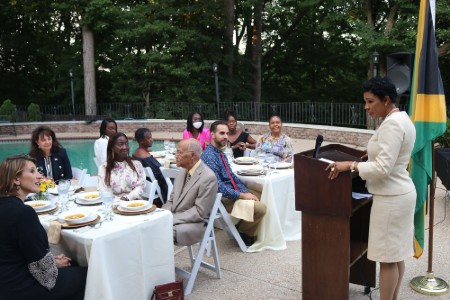 Ms. Feinstein described Dr. Lindsay’s selflessness and her willingness to lead in a time of crisis as being “just incredible.” “On behalf of Secretary Anthony Blinken and US Ambassador (to Jamaica) Nick Perry who is so proud, we want to laud you as a great American. We are all just in awe of your work in the time of our great crisis and congratulate you on your example, not only confined to the United States, but all around the world including Jamaica,” Ms. Feinstein said.

In congratulating Dr. Lindsay, Jamaica’s Ambassador to the United States Audrey Marks pointed out that Dr. Lindsay was one of “the awardees of the Presidential Medal Freedom for 2022, the US’ highest civilian honor accorded to individuals who have made exemplary contributions in various spheres of life.”

Speaking on behalf of the government and people of Jamaica, Ambassador Marks said “I would like to specially commend you, Dr. Lindsay, for leading your team of critical care nurses through many days and nights while risking your own lives in the early days of the Covid 19 battle. We also commend you for being the first of more than 300 million persons in the United States to take the vaccine outside of a clinical trial, amidst heightened uncertainty, becoming the face of the COVID-19 vaccine and inspiring others to take the courageous step.”

“It may be argued that your offering to take this first bold step marked an important turning point in the fight against the virus; for the first time, many, including myself, felt a sense of hope, and quite frankly, relief, that the end of the pandemic was finally within reach with a trusted vaccine” she said. 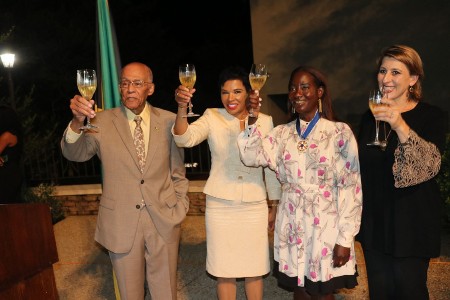 In proposing a toast to Dr. Lindsay, renowned economist Professor Donald Harris and father of Vice President Kamala Harris, pointed out that “there is so much about your personal accomplishments that stands out as iconic and makes it clear that this award is warranted and well deserved.”

This includes: Your professionalism as a healthcare provider; Your devotion to duty on the front lines of the struggle to provide healthcare to the needy; Your active role as a fierce advocate for public health of underserved communities; and Your courage and willingness to be the first person to publicly submit your body to the jab for the vaccine, at a time when many people, especially those in the minority community and among your fellow health care professionals, were reluctant or resistant to do so.

Professor Harris pointed to two aspects of Dr. Lindsay’s achievement that should not escape attention: First, your achievement serves to shine the spotlight on the longstanding tradition of Jamaican women migrating to the UK, Canada and US, to work as health care providers, becoming a mainstay of the health care system in those countries, and acquiring a reputation for the highest quality of service delivery.”

This, he said, was “all for the purpose of earning a living to take care of their children and family back home. For that, we all as Jamaicans are especially proud,” Professor Harris declared.

Secondly, Professor Harris pointed not only to her professional achievements, but also the Jamaican work and study ethic which saw her continued academic pursuits culminating in March 2021, when she completed a Doctor of Health Sciences degree with a concentration in global health, leadership and organizational behavior.”

In her response, Dr. Lindsay said she was overjoyed at the honor bestowed on her. “I am so proud as a Jamaican to receive the Presidential Medal of Freedom. I was born and raised in Clarendon, Jamaica. When I came to the US in 1986, I did not just come with my suitcase, I did not have any money but what I came with

were my Jamaican values: hard work, humility, gratitude, respect and determination. I have always carried them with me all my life.

Never in my wildest dreams did I think I would be here today wearing the presidential Medal of freedom,” Dr. Lindsay declared.

She said when she received the call that the President of the United States would like to talk with me, I thought it was a prank call,” she said. “Why would the President of the United States want to talk to me… a wonda wha im ha’ fi tell mi seh? she shared. “I did not retrieve the call from my voicemail until two days later! I am happy that the President saved my space in the line and did not give it away! Today I am proud to be standing here and to wear this award with pride!” Dr. Lindsay said.

Among those attending the reception were Dr. Lindsay’s mother Ms. Hazel Morgan, her siblings and other members of her family, as well as her co-workers and friends.