The estimated 45,000 attendees of Oprah's 2020 Vision: Your Life in Focus Tour’s first three stops—Fort Lauderdale, Minneapolis, Atlanta—discovered just how serious the talk show legend was about being more intimate about her life than she’s ever been. Considering that Winfrey built her brand on her openness, from battling weight issues to grappling with childhood sexual abuse, few could imagine her getting even more vulnerable. But she does just that as she helps others deal with their own stuff. 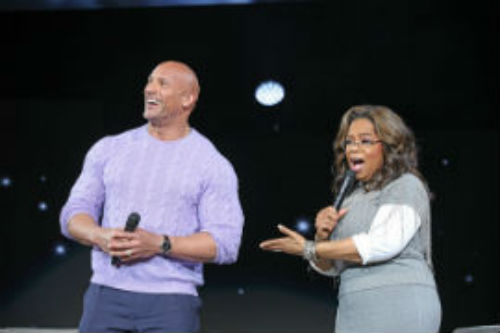 “My purpose for being here is because I have the most magnificent life of anybody I know,” Winfrey said some time after taking the stage at State Farm Arena in Atlanta January 25, explaining why she embarked on this nine-city tour to share with others.

Done in partnership with WW, formerly known as Weight Watchers, Oprah’s 2020 Vision puts an initial focus on wellness and weight loss. Ultimately, the event, at its core, is about transforming your own life. To that end, there is a customized journal. And Winfrey does that by heavily interacting with the crowd, as well as revealing super intimate details about her own life, including her strained relationship with her mother and how she found peace through forgiveness.

The woman who, from the outside looking in, has it all, admits here that she didn’t always have the one thing that she wanted – a strong, supportive relationship with her mother who passed in 2018. Winfrey’s failure to connect with her mother, Vernita Lee, who was a teenage, black single mother living in Jim Crow Mississippi when she was born. So Winfrey was the daughter she didn’t want. The billionaire didn’t reconcile those issues until her mother’s final days in 2018.

She forgave her mother, Winfrey shared, and thanked her for not aborting her or giving her up for adoption. Today she sees how her circumstances contributed greatly to her phenomenal success.

“My life opened up in ways I cannot even explain. I didn’t even know I needed to forgive it so deeply. And now I celebrate the fact that I had a mother who didn’t give me all that I need, because my ability to offer it to other people comes from what I actually needed,” she shared

Prior to revealing the details of her mother’s last days, an emotional Winfrey admitted that she had been a hypocrite for avoiding a confrontation with her mother -- while advising others everywhere to be brave. Using aspects of her own life, including her rags-to-riches fairytale and emotional scars, Winfrey stands as an example of what is possible when people embrace who they really are.

“My life, just like yours, has been marked by many a miracle,” Winfrey said. “Everybody in this room has been through some stuff. But you’re still here.”

Winfrey doesn’t just rely on her own life experiences. She also shares the stage with other luminaries, interviewing others with remarkable triumphs like former first lady Michelle Obama, Tracee Ellis Ross, Jennifer Lopez and Gayle King.

In Atlanta she spoke with Dwayne “The Rock” Johnson on stage about his own journey to success, spending a lot of time on his father who has passed away just nine days before. Even though Johnson’s  father, the famed wrestler Rocky Johnson, wasn’t as affectionate as he felt he needed at a child, he acknowledged his father’s challenges and expressed great pride in how he broke new ground as a black man wrestling in the South during the 1960s and 1970s to pave a way for him and other wrestlers.

“This all-white audience who would never cheer a black man cheered him in these arenas,” Johnson said in a moment of poignant praise. “And it’s not like he was wrestling these other black men; he was wrestling other white wrestlers.”

“He was a trailblazer,” Johnson said. “He did a lot of things that had never been done, but he also changed audience behavior, which was so hard.”

This breakthrough is exactly what so many of the attendees in Atlanta especially applauded. While moving with the global dance party phenomenon Daybreaker and Hough, along with group meditation, are nice highlights, it was the potential for emotional transformation that got the most enthusiastic response.

“A successful, full life is being able to live with the peace and the joy,” Winfrey added. “Few regrets, few regrets. So, here’s a full day for you to focus on that peace for yourself.”

Winfrey told her cheering fans that, these days, she’s spending her time exactly as she likes.

At this point in her life, she said, “I don’t do nothing I don’t want to do.”

For more information on the remaining dates of the tour, which wraps March 7 in Denver, as well as catch Winfrey's conversation with Dwayne "The Rock" Johnson and other special guests, visit facebook.com/oprahwinfrey