‘Nothing Ventured, Nothing Gained’ ~ SVG-Born Judge

NEW YORK– A St. Vincent and the Grenadines-born judge is issuing words of encouragement to those on a career path as he prepares to step down from the bench in New Jersey. 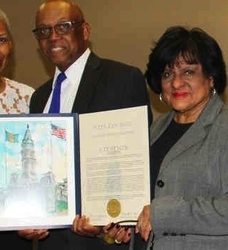 “Don’t be deterred by hurdles you encounter along your career journey,” Judge Cox urged during an interview with the Caribbean Media Corporation (CMC).

“The old truism ‘nothing ventured, nothing gained’ still holds true,” added the judge, who received his legal training at Rutgers University School of Law in Camden in New Jersey.

Cox, who holds a bachelor’s degree in economics from Long Island University, said when he decided to enter college he had some misgivings since he did not have the resources for four years of college in the United States.

“I still recall the words of the embassy representative, as she advised, ‘I’ll grant you the visa, but be sure to get to the college’s foreign student assistance office and inquire into any assistance for which you may qualify’.Music to my ears,” he said.

Similarly, Cox said, when he was accepted to law school, he resigned his full-time position with the promise of assistance from his mother.

“Shortly before my first semester, my mother, a long-time cancer survivor, passed away,” he explained. “With encouragement from family, particularly my wife, we took a leap of faith and relocated to South Jersey.

“My wife was offered a position on the first job interview in Philadelphia. I liken a career journey as a climb uphill: you bear the rigors going up in order to enjoy the ride coming down.”

The judge also urged: “Don’t let others define your goals or your potential.”

After working for just over two years after college, Cox said he was promoted to associate manager at Prudential Property & Casualty Insurance company.He said when he looked at the composition of the staff he noticed there was only one person of color at the management level and that he saw a law degree as “a short-cut to a promotion to manager.

“When I informed my manager of my decision, he asked rhetorically, ‘you are an associate manager, what else are you looking for?’,” Cox said. “That question erased any misgivings I may have had as to whether I was taking too much of a risk by resigning.”

Even during his orientation, following his appointment to the bench, Cox said he “had to listen to a colleague wonder if I was the right person for this assignment. She was wrong.”

Prior to these appointments, he served as staff attorney, chief counsel and chief administrative officer in the Superior Court of New Jersey, Appellate Division, from August 1982 to October 2002.

With his penchant to always reach for the stars, Cox said he relies heavily on a simple maxim.“The old saying is, ‘if you aim for the moon and miss, you just might land on a star’,” he said.

Cox said, as a people, “we are too often tempted to attribute our lack of motivation to discrimination,” stating that racial discrimination is “woven into the fabric of our society.

“We encounter it everywhere. We can’t wait for that utopian society to evolve where race never matters. It’s not happening any time soon. We have to accept it as a given and move on. Achievements under difficult circumstances are all the more noteworthy. Stars shine brighter on a dark night.”

Additionally, Judge Cox urges everyone not to feel overwhelmed by any assignment, warning that feeling so “might cause you to refrain from applying for promotional opportunities.”