Garfield Haughton had big plans for his 50th birthday. 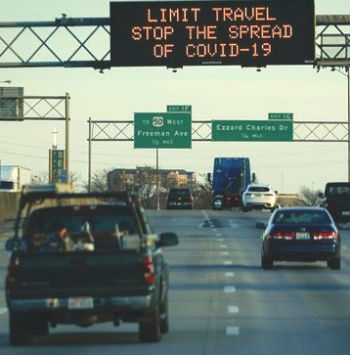 Signs on the road signal times have changed.He’d leave his United States residence in late March for his home parish of Manchester, Jamaica and drop a bash on Saturday, April 18 - with music, food, friends and, of course, a big cake.

Then the novel coronavirus (COVID-19) pandemic crashed the party.

“Everything changed,” Haughton told Caribbean Today. “The whole thing had to be called off because of the virus. It was a big disappointment.”

Like nearly every Caribbean national in the U.S., Haughton has been forced to overhaul his lifestyle in the face of COVID-19. They’ve fallen in line with the new normal.The four million-plus Caribbean community in the U.S. has willingly - or under legal orders - complied with the changes after witnessing more than a million infections and over 64,000 deathslinked to the virusin the countryby the end of April.

“Tan a yuh yard,” has become a rallying cry.

The lifestyle change has expanded across professions, age groups and religious beliefs. Church pews are mostly empty, as services arestreamed. Parties evaporated. Home-style cooking, like haircuts and make-up, are in vogue.Sporting competitions, a big attraction in the Caribbean community, have all but vanished during the pandemic.

Even smoking weed, still illegal in most places in the U.S. may have declined. Experts said the socialization aspects of the practice - including passing a joint or pipe among friends – can’t be done when people are stranded alone at home. But online alcohol sales jumped nearly 400 percent last month as morale dropped and people sought comfort at home.

“Death and hopelessness permeates the air,” explained Irwine Clare, a Caribbean American U.S. resident since 1978. “It’s quiet. Nobody is about. I’ve never felt like this before.”

Normal isn’t expected back anytime soon either. A COVID-19 vaccine won’t be ready for another year or more, experts predict. Most U.S. residents believe social distancing and stay-at-home practices should continue. Normal, more than 70 percent in one poll believe,won’t return until possibly a year.

To ease the burden, some have implemented counter-measures. The Jamaican Consulate General in Miami, for example, announced online prayer, counseling and encouragement support services to help deal with COVID-19 challenges. Some have found inventive ways to circumvent hurdles.

“We do virtual training,” said Young, “sending players drills via e-mail that they have to do on their own.”

But that has drawbacks.

“It’s not the same,” said Young, “because you don’t know who’s doing and who’s not doing.”

The same is true for schools. Virtual learning experience has been applied because classrooms are shuttered. Many students have opted out.

Meanwhile, many parents find themselves out of a job. Others work from home. For those classified as essential services, going outside means goinginto danger.

“I work at a hospital where people are dying from COVID-19,” said *J.R., a Caribbean American financial administrator in South Florida. “But I still have to go in some days and that is a big risk.”

Yet Caribbean nationals are adapting. They join longer lines to buy groceries in larger quantities at stores with half-empty shelves, to cut down on visits. But that can mean missing out on the latest supplies, a problem for island people used to fresh meat, fruits and veggies.

COVID-19 has also damaged businesses in the Caribbean community. Owners have been forced to close operations, lay off workers, cut salaries and confront the uncertainty of their own dwindling income. In the six weeks leading up to the end of April,30 million people in the U.S. lost their jobs.

“We applied for the money just as they said it would be available, but never heard another word,” explained *S.P., a Florida restaurant owner who had to close down. “I don’t know any Caribbean business owner who received money.”

Stimulus checks, worth an average $2,400 to couples who qualify, have started to come in, but by the end of April many Caribbean Americans had yet to see that money either.

Worry over COVID-19, plus an unstable financial outlook, only adds to the stress. The U.S. government attempted to ease the pressure by pushing back the normal April 15 deadline to file income taxes to July 15. Some think that’s inadequate.

“They needed to give more time,” Trinidadian-born Anthony Bernard, an accountant who identifies Caribbean nationals among his clients, said of the new filing date. “This (pandemic) is unprecedented.

“Yeah, it’s a different feeling that they’re not rushing to file taxes by April 15. Most people are thinking about if they’re getting paid or if they’ll lose their job. (COVID-19) has impacted everybody across the board. People are dying.”

Meanwhile, testing for COVID-19 is lagging badly. No one is exactly sure of the total number of victims – dead or alive. The American economyis also shrinking rapidly – by 4.8 percent for the first quarter of 2020. More bad news loom.

“We are going to see economic data for the second quarter that is worse than any data we have seen for the economy,” U.S. Federal Reserve Chairman Jerome Powell saidlate April.

But President Donald Trump, facing elections in November, is demanding a return to normalcy by “opening up” the U.S. Multiple states have fallen in line. In Florida, home to a large concentration of Caribbean nationals, some businesses, parks and beaches re-opened, even as anNBC/The Wall Street Journal poll found 55 percent feared opening up too quickly would expose them to the virus, which, through April, had infected more than 3.3 million globally, killing 240,000, through last month.

Caribbean nationals are largely in step with mostof the U.S. They would like stay-in-place restrictions to stay in place until the pandemic is over. COVID-19, they know, is highly contagious. There is no cure. Nobody wants to be the next victim.So many, like Bernard, who runs an accounting business, make adjustments.

“We’re not letting anybody in,” he said of his Miami office. “Most clients send in their (tax) material or drop it off. Social distancing. Whatever they need to do they’ll do it … Now it’s a whole other interaction.”

Bernard acknowledges the government’s near $3 trillion initialstimulus should benefit individuals and businesses. But he expected more. People like his Caribbean American clients, he said, have become victims of a tragedy they had no part in making, so shouldn’t be punished.

“All along people have been paying taxes,” Bernard explained. “We didn’t create this so they (government) have to step up.”

For Caribbean nationals in the U.S.,it’s the new normal.So Haughton plans to have his big bash next year.

“April 18 will fall on a Friday then,” he said, “but I’m still going to celebrate my 50th birthday.”

* Names changed because they are not authorized to speak on the record.