FRANCE - One of the most pleasant surprises at the FIFA Women’s World Cup here wasn’t the outstanding level of soccer, but the strong support for Jamaica’s Reggae Girlz, who made the Caribbean’s first ever appearance at the game’s biggest tournament. 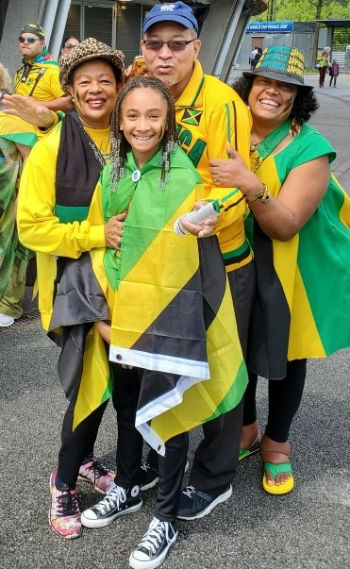 James, second right, and supporters of Jamaica get ready for Brazil in Grenoble.Hundreds flocked to the first game Jamaica played against Brazil in Grenoble, a winter sports haven in southeast France, proudly wearing the colors of the nation - black, green and gold - on items ranging from clothing, hats, horns and flags. Many followed the team to the second game in Reims against Italy, before returning to Grenoble for the third and final group game against Australia. They had a blast.

“As a Jamaican this is great,” Tony James, a former president of the Jamaica Football Federation, who made the trip with family and friends, told Caribbean Today in Grenoble.

“… People don’t understand the vibes it puts through your body to see a national team, or any national player in gear (at the World Cup) … that warms your heart.”

Along the way, Jamaican fans loudly announced themselves with chants, songs and shouts – inside the stadia where the Girlz played, in the streets an on public transportation. The core group, which ventured mainly from Jamaica, United States and Britain, were joined by new fans attracted by the Girlz’ colorful demeanor and warmth. The team noticed and welcomed the support too.

“I think it’s easy to get behind us,” Allyson Swaby, who along with her sister Chantelle started all three games, said in Reims. “It (Jamaica’s presence) is definitely different from anything the World Cup has seen …

“… We’re also picking up fans on the way. I think people are just inspired by us and what we’ve done with we have compared to some of the other teams. It’s a great feeling.”

Despite three losses in a row, which ended Jamaica’s World Cup dream, few of the Girlz’ supporters seemed to mind, intent instead on having a great time here and showing pride in the spirit of the team, which was the lowest ranked coming into the World Cup and featured the youngest group of players.

The Jamaican players and officials had their own supporting band. Most of the team had family members and friends at Jamaica’s games. One coach reportedly had more than two dozen family and friends in Grenoble.

Midfielder Marlo Sweatman’s parents and extended family from the U.S. showed up as well, along with the player’s boyfriend Melvin Digk, who is from the Netherlands. He brought along relatives and friends - a cousin, her husband and their two young daughters. The kids were dressed in Jamaica T-shirts and proudly waved the Jamaican flag. It was a formidable show of solidarity for the Girlz.

“I’m here to support my girlfriend … and the rest of the Jamaican team,” Digk, who lives with Sweatman in Hungary, where she plays professionally, as he prepared to enter the stadium in Reims, where Jamaica played its second World Cup game on June 14 against Italy.

“Marlo (and the Girlz) sacrificed a lot to be on this stage.”

Apart from family and friends connections, it appeared that the will to compete against tremendous odds - including well publicized lack of resources and floundering support from their own federation - also attracted fans to the Girlz.

“The fact that we qualified, it was difficult,” said Owen Plummer, a resident of London, England who was born to Jamaican parents and claimed to be a second cousin of Jamaica captain Konya Plummer. 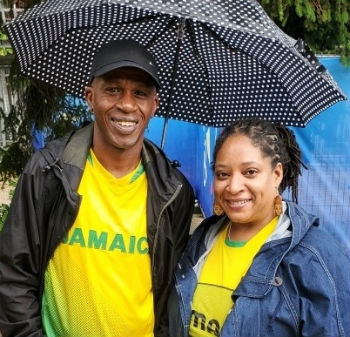 Plummer, left, and Constantine braved rain to root for the Girlz.

“But I think we’ve won already. Given the history of our background and the struggles that we have - even back home the ladies have struggles to get the financial and the political support that they need.” 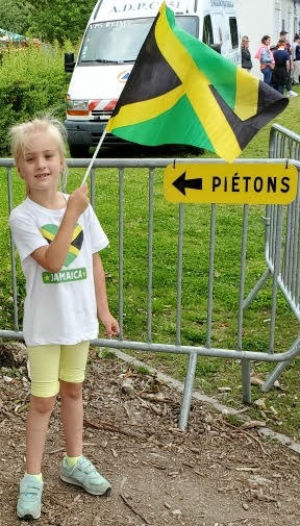 The Girlz picked up many new fans along the way.Non-Jamaicans with Caribbean heritage gravitated towards Jamaica’s team at the World Cup as well, claiming the Girlz represented all the nations of the region.

“I’m very proud,” said Cynthia Constantine, who was born in London, England of St. Lucian heritage. “… It’s not just Jamaica, but one family, one country.”

“We are the Caribbean,” added James. “… When people talk of the Caribbean they’re looking to Jamaica and here it is on the world stage. Women’s (soccer) who is there again? Jamaica!”

The fact that Jamaica, based on pre-World Cup rankings and almost all projections, appeared to have little chance to advance beyond the group stage, mattered little to most of the nation’s supporters. Some, however, got carried away with their optimism.

“We’ve come to support the underdogs, but we know they’re gonna win this thing,” claimed Audley Skyers from the so-called Skip Crew, a group from London, via Jamaica’s parish of Portland, before Jamaica lost 3-0 to Brazil.

Jamaica’s Reggae Girlz didn’t win the World Cup, a game or even secured a point. However, they did leave a mark here, conquering the hearts and minds of many who showed up here to witness them make history.