COCONUT CREEK, Fla.  – Food For The Poor donor retired Maj. Gen. Bernard “Burn” Loeffke will honor the memory of Peter Wang, one of 17 killed in the school shooting at Marjory Stoneman Douglas High School on Feb. 14, 2018.

Wang, 15, a member of the Junior Reserve Officers Training Corps (JROTC), was wearing his gray JROTC shirt on the day of the shooting and was killed trying to help classmates escape the gunman. His heroism touched many. Wang was posthumously accepted into the U.S. Military Academy at West Point, class of 2025, which is Gen. Loeffke’s alma mater.

“When I heard Peter wanted to go to West Point, it resonated with me because he loved West Point so much,” Loeffke said. “In my opinion, Peter Wang is a role model, not only in South Florida, but for West Point and the rest of the nation.”

It was the West Point Society of South Florida that connected Loeffke with the Wang family. He met with Peter’s parents at their restaurant in Pompano Beach last week to express his intention to honor their son during the inauguration of the Peacemakers Community of Hope, a 35-home community in El Salvador built through Food For The Poor. A memorial garden will be planted there, and a stone with the names of the honored will be placed in front of each tree. 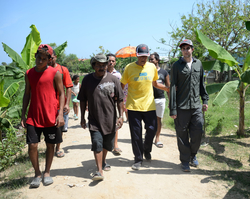 “Gen. Loeffke was the first American Defense Attache to the People’s Republic of China and was a very appropriate distinguished leader to meet with the Chinese family of a hero on a very dark day in America,” West Point Society of South FloridaPresident Chad Maxey said. “Gen. Loeffke's ability to converse in Chinese and talk about the personal courage that Peter Wang displayed, in uniform, during the shootings conveyed the importance of Peter Wang's actions to our community and our men and women in uniform.”

Moved by the general’s consideration, Peter’s father, Kong, hugged Loeffke. He said nothing, but Peter’s mother expressed her gratitude.

After decades in the Army, Loeffke’s focus has changed. He’s determined to build as many homes as possible to help poor families to have a better life in his Peacemaker Villages. Through Food For The Poor, he has built communities of homes in Jamaica, Nicaragua, Honduras and now El Salvador.

“In our latest Peacemakers Community of Hope, we are going to plant fruit trees in honor of my friends and soldiers who have died in combat, including Peter,” Loeffke said. “It is my desire that Peter’s name forever will be linked to peace.” 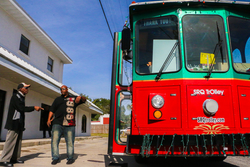 Loeffke, who was awarded the Purple Heart for wounds in combat, as well as Silver and Bronze Stars for Valor, said his passion for making a difference began decades after U.S. Army Sgt. Larry Morford lost his life in Vietnam, but saved his. He also credits China’s Cpl. Lei Feng for also saving his life. Both Morford and Lei Feng died at the age of 22.

“In the Gospel of John, Jesus lovingly tells His disciples that no one has greater love than this, that someone should surrender his life on behalf of his friends. This is what Sgt. Morford did for Gen. Loeffke decades ago, and what Peter Wang did for his classmates nearly one year ago,” Food For The Poor Executive Director Angel Aloma said. “It’s a poignant reminder about the fragility of life, but also about the power of love. We are thankful that the general has chosen this organization to help him transform the lives of destitute families in El Salvador and in other countries.”

Peter’s parents have expressed a desire to visit the memorial site of their son in El Salvador, along with Peter’s two younger brothers.

Food For The Poor, one of the largest international relief and development organizations in the nation, does much more than feed millions of the hungry poor primarily in 17 countries of the Caribbean and Latin America. This interdenominational Christian ministry provides emergency relief assistance, clean water, medicine, educational materials, homes, support for orphaned or abandoned children, care for the aged, skills training and micro-enterprise development assistance. For more information, please visit www.FoodForThePoor.org