Lemons, Sugar and Water: A Sweet Mix for a Local Fifth-Grader’s Mission

COCONUT CREEK, Fla.  – Findinga source for clean water is no easy task for the poor living in undeveloped communities throughout the world. But it’s especially hard for children who often are responsible for collectingwater for their families. 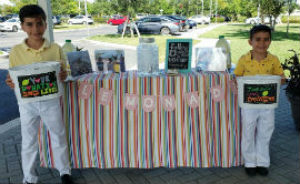 “I first began raising money when I was 6 years old selling lemonade. That's a typical way for kids to raise money, so I thought I would give it a try,” Christopher said. “Soon, I became known in my community as the ‘lemonade kid,’ so I decided to stick with it since I was building a reputation. In addition to selling lemonade, I organized a Hope Walk for Homes for three years in a row. I also tried selling note cards with my artwork and handmade bracelets, but lemonade continued to be my best fundraiser.”

Christopher’s interest in Haiti began when his mother, Sarah Evans,first traveled there with Food For The Poor four years ago. Evans shared her experiences with her family, which made an impact on young Christopher.By the time he was 9, he had built three homes in Haiti, two in La Fosse and one in Alpha Village. He also funded his first water well for a school with the support of family, friends and private donations. 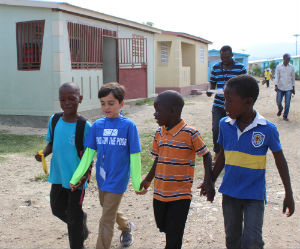 Christopher Evans, 10, visited Haiti for the first time with Food For The Poor last year. While there, he bonded with Cadeau, in orange shirt, and other boys who live, Alpha Village, where one of the three homes that Christopher funded was built. (Photo Proved to Food For The Poor)

“Our church has been incredibly supportive of Christopher’s fundraising efforts,” Evans said.“The week before he hosts a lemonade stand, they post an announcement in the church bulletin. They also invite him to give a short speech at the end of each Mass and the priests continue to endorse his work. The encouraging words of parishioners and clergy help us to know that they understand his message and support his efforts. With their support, Christopher raised $5,550 at his most recent lemonade stand on Palm Sunday.”

Last year, Christopher visited Haitiwith his mom and saw for himself how his donations are being used to transform lives.

“When I went to Haiti and I saw people living in destitution, I wondered what they needed the most,”Christopher said. “I learned that they need water because without water they cannot survive. I also learned that water could help to break their cycle of poverty. Unfortunately, many children, especially girls, aren’t able to go to school because they have to spend their day getting water. I want all children to be able to go to school like I do, so I decided to fundraise for clean water wells.”

Food For The Poor understands the importance of providing communities and schools in Haiti with access to clean water and proper sanitation. 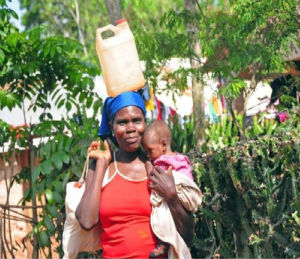 Food For The Poor understands the importance of providing communities and schools in Haiti with access to clean water and proper sanitation. Last year, the charity installed 124 water wells for a total of 770 water wells. Christopher Evans,10, has built two water wells in Haiti and is on a mission to build more in the rural regions of the Caribbean nation. (Photo/Food For The Poor)“Many of the young, elderly and the weak have died from preventable waterborne illnesses, such as dysentery, cholera and parasitic infections because they have ingested contaminated water,” Food For The Poor Executive Director Angel Alomasaid. “We are touched by Christopher’s desire to help the truly destitute with his priceless gifts of water wells. Because of his efforts,hundreds have access to clean drinking water. Every donation we receive is special, but to witness the compassion of young people like Christopher gives us hope for the future.”

Last year, Food For The Poor installed 124 water wells for a total of 770 water wells in Haiti.Christopher’s latest water well will serve about 300 residents in Monvil, Torbeck, Haiti, which is 105 miles West of Port-au-Prince.

“Christopher has a heart for taking action and making a difference,” Evanssaid.“I do not know where his philanthropic work will take him. I believe he will continue to follow his heart, and in doing so, he will continue to change the lives of many.”

Christopher also has a Food For The Poor Champions page for secure online donations to support his water wells mission in Haiti:www.FoodForThePoor.org/Christopher.