The ID bracelet of the first black pilot to serve with the British Royal Flying Corps during World War One, a Jamaican immigrant, is up for auction. 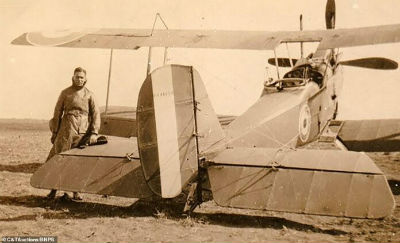 The Late Jamaican immigrant William Robinson Clarke.William Robinson Clarke was born on 4th October 1895 in Kingston, Jamaica. He became a mechanic in Jamaica and was one of the first individuals in the country to learn to drive. On the outbreak of the First World War in 1914, Clarke paid for his own travel to England to enlist. He joined the Royal Flying Corps on 26th July 1915. Due to his qualifications as a mechanic, he was assigned as a mechanic and then later a driver for an observation balloon company.

In December 1916 he started training to become a pilot, gaining his pilots wings on 26th April 1917. He was posted to No4 Squadron at Abeele on 27th May 1917, flying RE 8 aircraft on the Western Front. His operational service was very brief, like so many other young pilots at the time, on the morning of 28th July 1917 he was flying an operational reconnaissance mission over Ypres, five miles inside the German lines, when he, along with his observer, were attacked by German scouts, Clarke was seriously wounded in the action and although he gallantly tried to bring his aircraft back, he lost consciousness and his observer had to assist in bringing their aircraft down over British lines, force landing near Godewaersvelde.

In a letter written to his mother after the action he states, “I was doing some photographs a few miles the other side when about 5 Hun Scouts came down upon me, and before I could get away, I got a bullet through the spine. I managed to pilot the machine nearly back to the aerodrome, but had to put her down as I was too weak to fly anymore …… My Observer escaped without injury.”

Sergeant Clarke recovered from his wounds but was medically unfit to fly again, so he joined 254 Squadron as a mechanic. He was honorably discharged in 1919 and awarded the Silver War badge for his wounds. He returned to Jamaica after the war and was for many years the life president of the Jamaican branch of the Royal Air Forces Association. Clarke died in Kingston, Jamaica on 26th April 1981.

His aluminum disc is believed to have been found on the Western Front after the war and has been consigned for sale by a private collector. It is stamped ‘SGT W R CLARKE RFC’ on a leather wrist strap.

His dog tag goes up for sale on Wednesday at C&T Auctions, of Ashford, Kent, with an estimate of £150. The bracelet, with a buckle strap, is believed to have been found on the Western Front after the war and has been consigned for sale by a private collector.