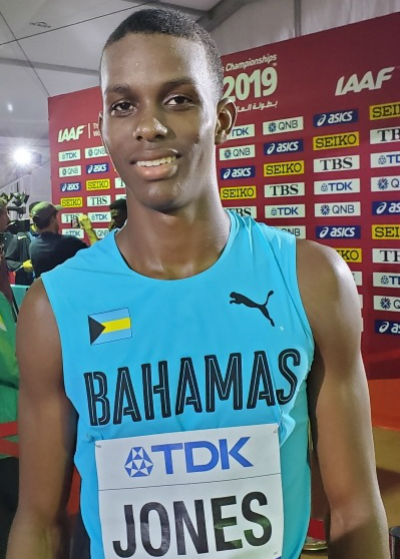 Jones is on a mission. Photograph by Gordon WilliamsOn Sept. 1, Hurricane Dorian smashed into The Bahamas, killing dozens of Jones’s compatriots and causing millions of dollars in damage. Less than a month later, he found himself on track and field’s biggest stage, carrying the hopes of an entire nation.It was a lot for Jones, who turns 17 on Nov. 8. But, he admitted, the events accelerated his maturity and framed a clear picture of his future.

“Yeah, I’ve definitely grown mentally and I’ve got a different perspective of the sport,” Jones said after competing at the 2019 IAAF World Championships in Athletics (WCA), which ended here last month.

“(Before) I was just looking at the sport as something I just do. But now, I look at it more as a blessing, more as a way for me to spread my talent to the world and to share the love of God and the blessings of God.”

Despite finishing last in his 200 meters heat at the WCA and then being disqualified, Jones’s talent indicates he has the tools to match his objectives. He dominated older athletes at this year‘s CARIFTA Games in the Caribbean and entered the WCA with impressive personal best times of 20.43 seconds in the 200 and 46.29 in the 400.

But the challenge of the stopwatch paled in comparison to what he encountered weeks ago. Freeport, Grand Bahama, where Jones makes his home, was one of two areas in The Bahamas hit hardest by the hurricane. No one died in Jones’sdistrict of Deadman’s Reef, but many homes, includinghis, were damaged. Remarkably,he slept as the storm raged.

“I didn’t really experience anything,” Jones explained. “… I don’t know why, I thought it was better to sleep to keep from worrying over it.”

He received a special WCA invitation from the IAAF, track and field’s governing body.The Bahamas encountered problems funding the team as money was diverted to more urgent needs.Yet the hurricanedidn’t really affect Jones’s preparation. The WCA was held Sept. 27 to Oct. 6, later in the year than usual, when Jones would normally be in his off-season. He didn’t expect to be at his best here. Still, he never imagined the gravity of the championships until he entered Khalifa International Stadium for his event.

“As soon as I walked out, to go to my start for the race, it immediately just touched me,” Jones explained. “I didn’t know what to do. I was shaking from my head go down.”

He said the jitters vanished “as soon as the gun went off.” However, he was left behind by bigger, faster men.

Jones hopes that doesn’t happen again. He’s caught the eye sought of senior Bahamian athletes and sought their advice on how to cope with the global spotlight.

“I know he came to the (WCA) to get his feet wet (at the senior level),”said reigning Olympic 400 meters champion Shaunae Miller-Uibo. “He’s a really talented kid and I think he has a really bright future.So, my advice to him is to just stay with it, stay focused and just keep on dreaming big.”

For now, he must face reality. Jones helped with hurricane clean-up at Tabernacle Baptist Christian Academy, the high school he attends, before he left for the WCA.

“We made sure that we get back to school as soon as possible,” he said.

After the WCA, Jones plans to take a break from track for a few weeks, satisfied with 2019. Then he’ll resume training for the next season. Looming are the 2020 Olympic Games, where Jones may get another shot to lift his compatriots in the hurricane’s aftermath.

“I just want to show all Bahamians that we band,” he said. “No matter what, just stay strong.”