COCONUT CREEK, Fla. – A 35-home community in San Miguelito, El Salvador is providing poor families in this mountainous region with the opportunity to break the cycle of poverty. The homes were built by donors led by retired Maj. Gen. Bernard “Burn” Loeffke and his fellow alumni, the White House Fellows Class of 1970-71. 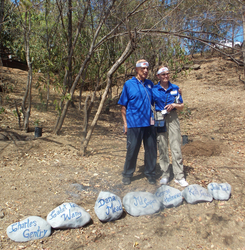 Peacemakers Community of Hope, a 35-home community in San Miguelito, El Salvador, a memorial garden retired Maj. Gen. Bernard “Burn” Loeffke, planted in memory of his closest friends. Gerry Gentry, the wife of former White House Fellow Charles Gentry, traveled to El Salvador to pay tribute to her husband. The garden also has a memorial for Peter Wang, one of 17 killed in the school shooting at Marjory Stoneman Douglas High School on Feb. 14, 2018. The Peacemakers Community of Hope has a chicken project and goat farms - a source of income and food for families. Materials for making hammocks were given to families with weaving skills to establishs mall businesses. Since many in El Salvador are accustomed to sleeping in hammocks, the hammock making-project is an income generator.

The recently dedicated Peacemakers Community of Hope also has a memorial garden planted by Loeffke in memory of his closest friends who were White House Fellows. The garden also has a memorial for Peter Wang, one of 17 killed in the school shooting at Marjory Stoneman Douglas High School on Feb. 14, 2018.

“These are all the White House Fellows who are no longer with us,” said Loeffke.“All of these have died recently, so what we have done is to construct a memory garden to remember them because remembering means living, all of these now live in a community of hope. Peter Wang is here, too. He’s not a White House Fellow, but he’s here because he’s a real hero who saved the lives of other children and was killed doing so.”

The Remember Me Garden contains seven large stones with the names of the honored. Loeffke helped place each stone in front of a young fruit tree. These trees are among the nearly two dozen avocado, mango, mamón and nance varieties that will grow into fruit-producing trees.

Charles Gentry’s widow traveled to El Salvador with the retired general to place a memorial for her husband. 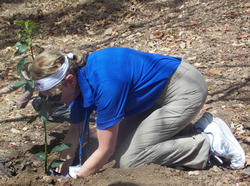 Gerry Gentry, the wife of former White House Fellow Charles Gentry, traveled to El Salvador and planted a fruit tree in tribute to her husband. Peacemakers Community of Hope, a 35-home community in San Miguelito, El Salvador, has a memorial garden retired Maj. Gen. Bernard “Burn” Loeffke planted in memory of his closest friends who were White House Fellows.

“Charles was a member of the White House Fellows, which changed his life,” said Gerry Gentry. “He would have loved being recognized here. He loved to travel; he loved the people of other countries and learning about their cultures. Thank you for allowing me to honor him in this way.”

Meeting the families in El Salvador was touching for Loeffke, he said, especially when he met with Marta and her son, Jamie, who were the recipients of one of the first homes to be built in the Peacemakers Community of Hope.

Her home was built in memory of Col. Dana Mead, West Point class of 1957and in honor of Peter Wang who was posthumously accepted into West Point,class of 2025.A plaque bearing Mead’s name is on the house and a photo of Peter hangs inside. 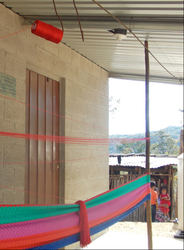 Materials for making hammocks were given to San Miguelito families with weaving skills to establish small businesses. Since many in El Salvador are accustomed to sleeping on hammocks, the hammock project is a good income-generator. “It’s an honor for us to have a picture of Peter here in our home,” said Marta. “We are happy, too, because this is a way for us to honor you for all of the help you have given us.”

Seven-year-old Jamie said, “When I grow up I want to be a good guy, a good person.”

After decades in the Army, Loeffke’s focus has changed. He’s determined to do good by building as many homes as possible to help poor families to have a better life in his Peacemaker Communities. Through Food For The Poor, he has built homes in Jamaica, Nicaragua, Honduras and El Salvador.

“El Salvador has a great need for safe and secure housing, especially in the rural mountainous areas,” said Food For The Poor Executive Director Angel Aloma. “The Peacemakers Community of Hope is a wonderful gift and its impact is immediate for the 35 families living there. Gen. Loeffke’s compassion for the poor is renewing hope and transforming lives. Food For The Poor is blessed to have him as a donor.”

The general also visited Santa Cruz La Vega, which is located on a lake created by a crater in central El Salvador. Food For The Poor has a number of Santa Cruz La Vega projects,which include a new 15-home community, macro-tunnels for agriculture and tilapia farms. The charity also supports the local school with projects and distribution.

Before leaving, Loeffke encouraged the children who gathered to greet him to study hard and to mind their parents; then he did something impromptu – he asked everyone there to march around the community with him. 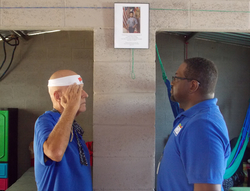 A 35-home community in San Miguelito, El Salvador, was built by Food The Poor Donor retired Maj. Gen. Bernard “Burn” Loeffke. One of the first homes to be built in the Peacemakers Community of Hope is in honor of Peter Wang who was posthumously accepted into West Point, class of 2025. Loeffke salutes after the photo of Peter was placed on the wall by Food For The Poor Donor Relations Advisor Chris Wallace.

Loeffke, who was awarded the Purple Heart for wounds in combat, as well as Silver and Bronze Stars for Valor, said his passion for making a difference began decades after U.S. Army Sgt. Larry Morford lost his life in Vietnam, but along with others saved his. He also credits China’s Cpl. Lei Feng for being a role model to many. Both Morford and Lei Feng died at the age of 22.

“He’s the reason that I went to medical school so I could help the poor in other countries,” Loeffke said.