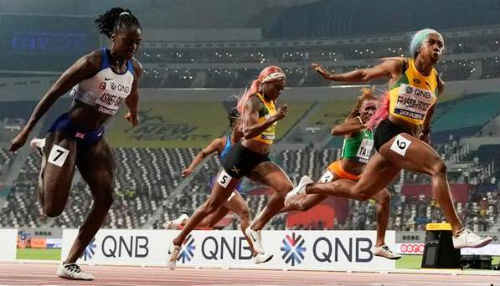 Fraser-Pryce led women on and off the track.Yet among the most captivating stories of the 2019 IAAF World Championships in Athletics (WCA) here last monthwere those with a distinct Caribbean flavor.

Steven Gardiner offered hope to his beloved, but hurricane-ravaged Bahamas by winning the men’s 400 meters. Jamaica’s Tajay Gayle shocked the world and took gold in the men’s long jump. Grenada’s Anderson Peters triumphed in the men’s javelin. Even a loser, Aruba’s Jonathan Busby, became a celebrity after a competitor paused to help him complete his race.

However, it was Shelly-Ann Fraser-Pryce who emerged possibly most inspiring. It wasn’t just the Jamaican’s multi-colored hair or flamboyant personality which caught everyone’s eye. Fraser-Pryce won the 100 meters in a world leading time, claiming, for the fourth time, the title of world’s fastest woman. She was also key in Jamaica’s victorious 4x100 meters relay team. Yet it was her message which captured hearts and minds here and beyond sports. Fraser-Pryce forced the spotlight onto the power of women.

Arguably the best pure female sprinter the world has known, she was already a household name to track and field observers long before arriving here. Multiple Olympic and WCA gold medals made sure of that. But Fraser-Pryce had been absent from the world stage for a while, after becoming pregnant and later delivering her son Zyon in Aug. 2017. Many doubted the “Pocket Rocket” could make a successful comeback, even after she narrowly lost the 100 and 200 meters at the Jamaica national trials to reigning Olympic champion Elaine Thompson. She brushed the naysayers aside. 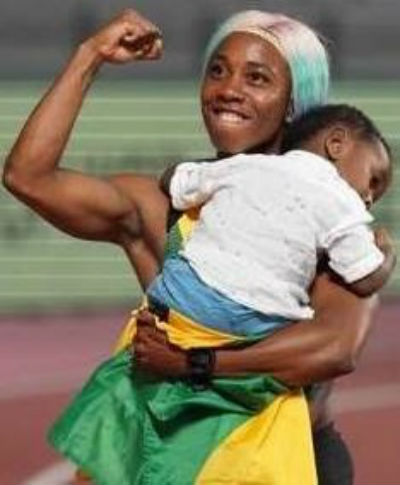 “A lot of persons said I should retire, and do it gracefully,” Fraser-Pryce said here. “I was like ‘O.K., that’s what you think’.”

The 32-year-old proceeded to score what she called “a win for mothers” by blasting to double victories and noticeably brightened the path for women in sports, underlining that age and motherhood can no longer be seen as impediments to career progress.

She wasn’t the first to do it. She wasn't even the last during WCA2019, after American mother-of-two Nia Ali won the 100 meters hurdles on the final night. But her journey to greatness left the biggest mark.In the process, she’s pulling an entire generation along.

“Obviously I want to win, but the resonance of Shelly-Ann’s victory means a lot to me as well,” explained Great Britain’s 23-year-old Dina Asher-Smith, who finished second to Fraser-Pryce in the 100 and 4x100, and won the 200 meters. “So, I know it’s also inspiring to show me what I can do throughout my career and wherever I want to take my life.”

“I know women can accomplish what men do,” added Marie Josée Ta Lou from Ivory Coast, who finished third in the 100.“So, we are women, but we are human. So we can do everything. We do it now. So I don’t want because we are girls, because we have to go and give birth we are treated like another person. We are the same. Don’t discriminate with us.”

The world’s rotten, open secret - that men get the lion’s share of everything - is no longer hidden. Serena Williams, arguably the greatest tennis player ever, is the only woman on the list of top 100 money earners in sports for 2019 at number 63, according to Forbes. This summer, women fired back, getting sportswear company Nike to dump its policy of not paying contracted athletes who became pregnant.

Unfortunately, women still feel compelled to say - out loud - they deserve better. This year, WCA provided a perfect platform - the best in track and field, plus a global audience. The women boldly stepped forward. Dalilah Muhammad of the U.S. won the women’s 400 meters hurdles in 52.16 seconds, the only individual world record of the championships. The other WR was the U.S. win in the mixed 4x400 meters relay, which includes two women on each team.

Thirty-something mothers like Americans Allyson Felix, who gave birth less than a year ago, and Ali joined Fraser-Pryce to showcase what women have always known - they have power and are not afraid to unleash it.

“Just because you’re a mom doesn’t mean that you can’t get out here and continue to be an athlete as well; a top world class athlete,” said Ali. “And just watching that is always an inspiration, because I know how much our young ones look up to us. Oh man, it’s been brilliant.”

The message has rubbed off on male competitors.

“Having a baby and coming back with this attitude shows how powerful women really are; that their mind is on another level,”said American Christian Taylor after winning the men’s triple jump.

Track and field is fueled by sponsorship from sporting gear manufacturers. Increasing public pressure may finally be nudging them to pay based on production, not gender, age or both.

“As far as women who are mothers, that are still competing, I think the views are changing in a positive way,” explained U.S.-based Jamaican Claude Bryan, agent for several elite Caribbean athletes, including Gardiner, Shaunae Miller-Uibo, Omar McLeod and Veronica Campbell-Brown.

“It helps the shoe industry company when society and the views of the public see these women in a positive light. Then it reflects positively on the sponsors.”

“Shelly-Ann, what she’s really doing is to demonstrate how successfully women can live independent lives, both in their careers and also in their personal family life,” Jamaican businessman Douglas Orane, who has known Fraser-Pryce for more than a decade, said here. “… It’s a remarkable example, which I don’t think is unique to her, but, because she is so well known, it is a tremendously positive example to young women everywhere.”

Outside the sporting arena, the Caribbean is leading the way in recognizing the contributions of women. Research by Expert Market showed four nations in the top 10 with the highest percentage of women in managerial positions. Jamaica was ranked first. On the track, however, Fraser-Pryce’s influence has transcended stopwatches.

“Her being a veteran, had a baby and came back and still a world champion, that speaks volumes and that just shows me that I’m nowhere near the best as yet,” said Jamaican Jonielle Smith, who made the 100 meters final here and joined Fraser-Pryce in the sprint relay. “So I have a whole lot more work to do.”

“(What she’s doing,) it definitely is motivation,” said Trinidad and Tobago’s Kelly-Ann Baptiste, a WCA 100 semi-finalist who turned 33 last month.

Fraser-Pryce admitted learning of her pregnancy made her cry. She worried about her future -if she’d ever get back to the top.

“For 10 weeks, I couldn’t lift weights on my back and mentally, it’s even harder because you’re 30,” Fraser-Pryce explained. “You’re having a baby, the females are out there running fast. You wonder if you can come back.”

So she fought back - for herself, family and, it seems, women everywhere.

“I knew how I felt and I knew I wasn’t ready to go (into retirement),” said Fraser-Pryce, who claims having the baby made her faster. “I had something left to do and I stayed focused on the goal.”

“What (Fraser-Pryce) has done is amazing,”saidFelix said. “… Women are amazing and she’s leading the way.”