Giving Back to St. Mary

South Florida’s Jamaican-born residents are among the most active Diaspora community when it comes to giving back to the country of their birth. The growing number of Jamaican high school alumni associations and parish development groups in the state certainly underscores the importance of community building and support among Jamaicans. In fact, more than 50 such associations are listed on the Coalition of Jamaican Alumni Associations of Florida’s website. These groups are not just about meeting old friends at reunions, they host events to raise funds for educational and infrastructure development for the institutions and communities that helped shape them. 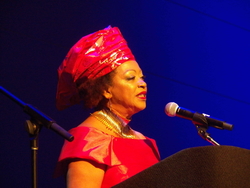 One such organisation, The United Friends of Highgate (UFOH), hosted a gala event on 29 December 2018 to raise awareness, and funds, for the town of Highgate in the Parish of St. Mary. Steered by a group of volunteers who were born or grew up in the town of Highgate, the non-profit organisation, in existence for more than ten years, is committed “to contribute to the economical, physical, educational, environmental, cultural, and social development of Highgate”, said Lorrimer Burford, UFOH’s president.

With the help of its Highgate Chapter, also known as UFOH Ground Zero, the organisation identifies the most essential needs of the community and with funds raised through its events, provides medical supplies and equipment, skills development, and educational needs to schools, health centres, and social groups. And importantly, the group is non-partisan, making decisions based strictly on community welfare.

Burford reiterated: “Our immediate job is to meet with the leaders in Highgate and, like Bob Marley in his ‘One Love’ concert did, encourage them to hold hands in a remarkable yet common cause for Highgate’s development, no matter their political persuasion”.

Among supporters at the December function was guest speaker Dr. Verene Shepherd, professor of Social History at the University of the West Indies Mona Campus and Director of the Institute for Gender & Development Studies. Professor Shepherd extolled the work being done by UFOH for the Parish in which she was born.

“St. Mary has a proud history of advocacy and activism for social equality and social justice. You are truly living up to the meaning of the word ‘Highgate’… meaning way, road, path. If we take its symbolic meaning we could say that you are making a way, creating a road or path that ensures that the most vulnerable in the parish can walk towards social mobility and social equality,” said Shepherd.

She went on to name several well-known Jamaicans who hail from St. Mary and have contributed much to society, among them Member of Parliament and former Minister of Youth and Culture Lisa Hanna, Senator Floyd Morris, reggae singer Beres Hammond, Ambassador Audrey Marks, Attorney Antoinette Haughton to name a few.

Shepherd also reminded the audience that these contemporary leaders could not have achieved success without the support of the strong shoulders of revolutionary activists from which they launched. Credit must go to Chief Tacky who led a war to liberate Jamaica from British bondage in April 1760, the professor urged. Indeed it was Tacky who headed the march among the enslaved to Port Maria in the fight for freedom.

“Tacky’s fight was not in vain because every couple of years after that a war for liberation broke out in St. Mary, Shepherd added, noting “We need to lobby for Chief Tacky to become a National Hero of Jamaica because he and his army laid the groundwork for what  Sharpe and others later achieved”.

UFOH is continuing the legacy by focusing on its mission to create a strong social and economic base through collaborative community development. Helping Highgate residents create goods and services via entrepreneurial enterprises, contributing to educational funds, and supporting infrastructural development is a major strategy that is slowly but surely shaping a sustainable Highgate community.