She is undoubtedly a Black Caribbean history marker in 2022 as she becomes the first Haitian American Congresswoman from the state of Florida and only the second in the history of the United States to serve in the House of Representatives. 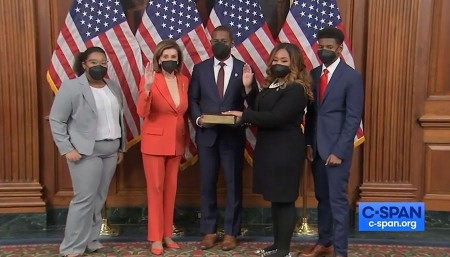 Sheila Cherfilus-McCormick, 2nd from r., is sworn in as the first Haitian American congressional representative from Florida by Speaker Nancy Pelosi on Jan. 18, 2022. (CSPAN image) She is Haitian American Sheila Cherfilus-McCormick, the newest member of congress who now fills the seat left vacant by the late Alcee Hastings in Florida's 20th Congressional district. The district includes most of the majority-black precincts in and around Fort Lauderdale and West Palm Beach, including places like North Lauderdale, Lauderhill, Lauderdale Lakes, Tamarac, Miramar, Lake Park, Riviera Beach, along with parts of Pompano Beach and Sunrise as well as a vast area inland to the southeastern shores of Lake Okeechobee, including the community of Belle Glade and the Palm Beach International Airport.

Cherfilus-McCormick was sworn in on Jan. 18th on Capitol Hill after trouncing Republican Jason Mariner by a 59 percent margin in the general election on Jan. 12th. She had earlier defeated Jamaican-born Dale Holness in the primary election by just five votes.

“It’s official, official, let’s get to work,” Cherfilus-McCormick tweeted after being sworn in. “This is only the beginning. #yourcongresswoman.”

After, she told Caribbean Today: “We’re here… When I walked through the halls, and I saw my name I said, oh my God, what if I didn't believe. What if I said it couldn’t have happened, then I wouldn't be here.”

Her passion, commitment, and drive is the right formula for the political reforms the new congresswoman is rearing to tackle. Although she has never held elective office, it is the fight in her that has led her here.

Congresswoman Cherfilus-McCormick is a lawyer, the CEO of Trinity Healthcare Services, a wife, a mother. It was her staunch advocacy for her daughter, and other black and brown children who are systematically labeled with autism or ADHD that started her fight for proper representation. After two failed attempts at Congress, Cherfilus-McCormick has now taken the power in her own hands.

Born in Brooklyn, New York to Haitian parents, this first-generation Haitian American will be the voice of a large, and still growing, Caribbean community in South Florida. And Cherfilus-McCormick identifies completely with them.

“My Caribbean-ness has always been part of my identity. We always sent money back home. So, you grew up knowing that you are an investment, that everybody sacrificed for your parents and you to be here. Family centeredness, taking care of family here and at home has always been important. So, it’s important to me to serve the community that I grew up in,” she told CT.

One of the Congresswoman’s greatest concerns is how black immigrants are treated. She noted that not everybody at the US-Mexico border are Haitians, but all black people are lumped into one category – “Haitian.”

She noted that many are not given the hearing they are entitled to so, immigration policies will be one of her top priorities.

One way the new congresswoman intends to do this right away is to alert the Haitian and Caribbean community about legal routes into the country.

“Right now, visas are being handed out so we can actually bring in some people from the Caribbean to work in the United States, especially in South Florida,” she said. “So, we have to ensure that our community is aware of these visas, because they are allocated per country… This is one of the first times that Haiti is included. Jamaica has always been included, but now there are more Caribbean islands.”

“My obligation at this point is to let our district know that this is an opportunity to unite families,” Congresswoman Cherfilus-McCormick  added. “And also for our small businesses to know that this is a real option that we need to exercise now, because that's how we continue to have the partnerships with the Caribbean. That’s how we consistently have the cultural competency.”

While immigration policy reform is a major focus for Congresswoman Cherfilus-McCormick, she says she will also be addressing Haiti’s problems as part of an international strategy.

She explained that Haiti has a lot of issues with infrastructure, security, and a government that is being eroded which has led to various countries and NGOs coming to help. But there are still real obstacles.

“We have to be in a position where we’re encouraging stability, and that starts with a fact-finding mission,” said the new congresswoman. “We go and take a look, not just with the US but some other leaders, especially Haitian Americans, who are sustaining the economy in Haiti. So, we need to have more Haitian American organizations, or even more Caribbean organizations that really have a heart for the success of the community.”

There is a precedent for this, she added.

“There’s certain money that’s spent in Israel that has to be used with contractors in the US. Those contractors in the US more than likely are Jewish, they are Israeli. So, you see the productivity, they both have the same mission to make it work,” said Cherfilus-McCormick.

Her proposal to help her district out of poverty and maintain stability continues with her People’s Prosperity Plan, that seeks to give $1,000 per month to families making less than $75,000 per year. And even though people say it is progressive, Cherfilus-McCormick said it’s nothing new.

Her colleague Congresswoman Ilhan Omar proposed a similar stimulus package but at $1,200 per month. An identical plan has also come out of California, proposing $1,000 per struggling family. Child tax credits is another such program, helping families fight poverty.

So, how will Cherfilus-McCormick get her program through?

“One way is through passing legislation,” she told CT. “The second way is what we see going on throughout the entire country. There are pilot programs that are spearheaded by the municipalities and cities, the states. And what they’re doing is similar to mine. They are now using their discretionary funding, federal funding for these programs.”

Healthcare is another problem at the root of America’s social disparity said Cherfilus-McCormick.

“Healthcare has always been tied to your job, better jobs. And a lot of those jobs aren’t open or available for us,” she added, while noting that there will never be just one type of healthcare, there must be options for those who fall outside of the norm.

While she has already loaded up her plate, this new congresswoman is prepared to go to battle for her community and not simply be content with being a history maker on paper.

“You meet the needs of the people, and you do whatever it takes to get there. You dream big and fight for it,” she said.