COCONUT CREEK, Fla.  – Food For The Poor released 49 nonviolent offenders, including one woman, from prisons in Guyana, Haiti and Jamaica for Holy Week,just as the rapid spread of COVID-19 (coronavirus) reached the region. 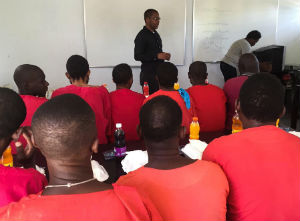 Father Leon Sadoni and Food For The Poor staff offer words of encouragement to nonviolent offenders prior to release from the prison in Fort Liberté. Food For The Poor paid the fines of 42 people, including one woman, from two prisons in northern Haiti. Some have been incarcerated for years because of their inability to pay their fines. (Photo/Food For The Poor)“Health experts worldwide agree that the best way to slow the spread of this coronavirus is to maintain social distancing,” said Food For The Poor President/CEO Ed Raine. “But for those in prison, especially in the Caribbean and Latin America where overcrowding is a chronic issue, social distancing is nearly impossible.Thanks to our compassionate donors we were able to help release the 49 incarcerated people from their cells this Easter season.”

Some of the newly released were overcome with emotion after spending years in a Haitian prison–neither they nor their families had the money to help them. Over time, the debts they owed only increased.

Nickerson, 49, spent nine years in a Cap-Haitien prison for stealing a few chickens from a farm to feed his family; Louby, 19, was locked up for two years after he was accused of taking four cases of soda, and Emmanuel, 20, stole a goat to pay his school fees, a decision that landed him in a Fort Liberté prison for more than a year.

“I want to thank you for giving me another chance to make things right,” Emmanuel said.

The Food For The Poor Prison Ministry Program started in 1998 to help nonviolent offenders in parts of the Caribbean and Latin America who could not afford to pay their fines to get out of prison and to make a fresh start. 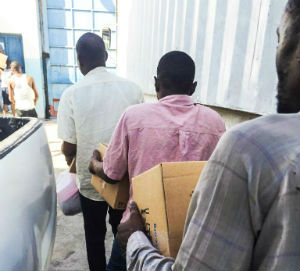 Four men in Guyana were freed from the Lusignan Prison on the east coast of Demerara.In Jamaica, Food For The Poor paid the fines of three nonviolent offenders from the St. Catherine Adult Correctional Centre. In Haiti, 41 men and one woman were released from prison.

To support Food For The Poor's Prison Ministry Program, checks payable to Food For The Poor can be mailed to 6401 Lyons Road, Coconut Creek, FL 33073. Please include reference number "SC# 74122" to ensure your donation is correctly routed.

Food For The Poor, one of the largest international relief and development organizations in the nation, does much more than feed millions of the hungry poor primarily in 17 countries of the Caribbean and Latin America. This interdenominational Christian ministry provides emergency relief assistance, clean water, medicine, educational materials, homes, support for orphaned and abandoned children, care for the aged, skills training and micro-enterprise development assistance. For more information, please visit www.FoodForThePoor.org.