The Christmas season is here again, a time when we reflect on life and pay tribute to those close to us who have passed on. Adam Stewart is doing exactly that, as he celebrates the life and legacy of his late father Gordon ‘Butch’ Stewart. 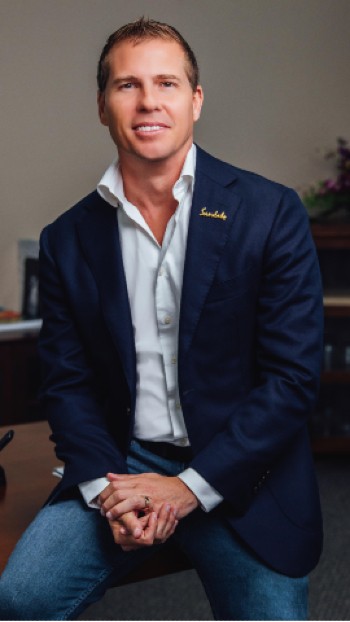 Chief Executive of Sandals Resorts International, (SRI), Adam Stewart, says “the Caribbean is our home and the link between tourism and the well-being of the local Caribbean communities where we operate is undeniable.” (Contributed Image)As Chief Executive of Sandals Resorts International, (SRI), for more than a decade, the young Stewart has seamlessly taken over the reins as executive chairman of the all-inclusive destination resort, recognized among the best in the Caribbean.

“With each new day, I am coming to understand the full impact of my dad on my life, the Caribbean and the entire hospitality industry,” Stewart told Caribbean Today. “But I will say this. My dad understood necessity. He was a consummate salesperson who insisted that the customer come first and always aimed to exceed expectations. He believed in people and in teamwork. And he dreamed bigger than anyone I have ever known.”

The Sandals executive chairman extolled the creativity and fearlessness his father brought to the industry, noting that he showed hoteliers new ways to delight guests, while teaching generations of Caribbean people that what is developed, built, and brought to life in the Caribbean can compete as successfully as any innovation coming from anywhere else in the world.

The brand’s unconventionality is what has made it stand out for the past 40 years. Sandals Resorts International turns 40 this year and there is much to toast.

“As a sixth-generation Jamaican, I am proud to say that Sandals Resorts was founded in 1981 – the year I was born, by a single person, my father – the late Gordon “Butch” Stewart in Montego Bay, Jamaica,” said Adam Stewart. “The brand and I grew up together as siblings. I’ve been thinking a lot about my dad’s legacy and this brand he built and loved into existence. He gave people in the region the confidence to roll the dice to act on their own entrepreneurship. He showed them that even in the Caribbean, it is possible to dream big and never settle.”

An important part of its 40th anniversary commemoration is its 40-for-40 Initiative. Sandals Resorts International along with Sandals Foundation, its non-profit arm launched in 2009, will identify 40 community projects around the Caribbean that will help balance the undeniable link between the environment and industry.

From sustainable food production to helping artisans develop their talents, to ecological conservation, these programs aim to transform and improve local Caribbean communities.

“My dad began this business in 1981 at the age of 40,” said Stewart. “His vision was about relentlessly pursuing relevancy and is a lesson as critical to the success of Sandals today. As I take on the challenge as a 40-year-old in 2021, I’m fully committed to continuing to push past the boundaries of innovation and luxury for our ever-evolving guests.”

Even new properties are conceptualized and built with Sandals’ Corporate Social Responsibility in mind. The couples-only brand recently announced the opening of its 16th resort, Sandals Royal Curacao.  A 44-acre property within a 3000-acre protected preserve will allow guests to explore eco-friendly settings while being environmentally responsible.

Its Beaches brand, slated to open in St. Vincent in 2023, promises to bring employment and training opportunities to the island affected by volcanic eruptions earlier this year.

“What we are building right now in Curaçao, Jamaica, and St. Vincent is unlike anything we’ve ever done before,” said the executive chairman. “It’s the future of this brand – or as I like to call it, Sandals and Beaches 2.0.”

The break with tradition continues with the construction of the Gordon ‘Butch’ Stewart International School of Hospitality and Tourism at The University of the West Indies, said Stewart. He added that the school, will be built in partnership with his alma mater, Florida International University’s Chaplin School of Hospitality & Tourism Management, offering fully accredited undergraduate and graduate programming. The new school will be located on the Western Campus of The University of the West Indies, Mona, in Montego Bay, Jamaica.

“My father believed in learning by experience - ‘on-the-job training,’ as he often put it. As a consummate entrepreneur and a lifelong dreamer, he knew success was born beyond the boardroom; found instead in the moments of exploration and discovery.”

Stewart continues to push to maintain that success, even in the face of adversity. Asked about the effects of the COVID-19 pandemic on the industry, he struck an optimistic note.

“Coming through the pandemic as successfully as we did, I am incredibly proud of our Caribbean tourism industry that came together with government to instill confidence and inspire hope,” said the Sandals Executive Chairman. “The ecosphere of tourism in the Caribbean is far-reaching, impacting not simply hotel workers, but farmers and fishers, taxi drivers and craftspeople. We are heading into one of the best winter seasons Sandals has ever seen, and we did it because private and public worked together to establish a way forward, where all members of the community could benefit from the economic engine that is tourism. This is not my accomplishment, but our Caribbean travel community’s success, and I am so proud to have played a role.”

With Sandals Resorts International’s success in the Caribbean, it is not inconceivable that spreading its wings internationally could be a viable venture. But this is not in the cards said Adam Stewart.

“We’re a Caribbean company doing business in the Caribbean,” he told Caribbean Today. “This is our sandbox, and no one knows the region, the people, and its possibilities better than we do. Sandals Resorts is the largest private employer in the Caribbean and our roots here go deep. I am a sixth-generation Jamaican, and I am raising my children here. The Caribbean is our home and the link between tourism and the well-being of the local Caribbean communities where we operate is undeniable.”