Thousands of Caribbean-born children brought to the United States illegally are among those who’ve been spared deportation - for now - by the highest court in the land. 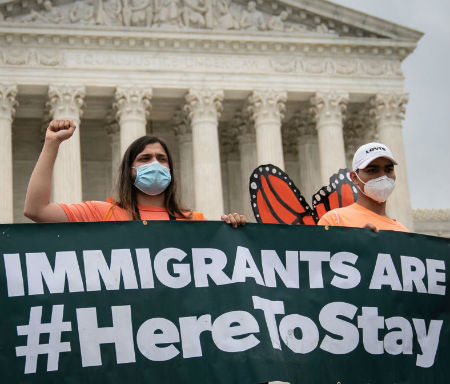 DACA supporters celebrate victory at the highest court.The U.S. Supreme Court last month ruled that recipients of the Deferred Action for Childhood Arrivals (DACA), known as “Dreamers”, can continue to receive benefits that come with the program, including education and employment, and cannot be immediately sent back to their country of birth.

The court’s judges blocked an attempt by the administration of President Donald Trump to end DACA, which was first implemented via executive order by his predecessor Barack Obama in June 2012.

The decision, however, does not mean a lifetime pass for DACA recipients. The court stated the Trump administration did not follow the proper legal procedures, violating the Administrative Procedure Act by ending the program without consideration to the harm it may cause the recipients.

“We do not decide whether DACA or its rescission are proud policies,” explained Chief Justice John Roberts, who joined the majority in the 5-4 decision.

The Trump administration could try again, at a later date, to shutter DACA. The U.S. Congress, meanwhile, could pass legislation making DACA legal. However, it is unlikely Republicans, who currently make up the majority in the U.S. Senate, or the Republican president would green light it into law.

Public opinion polls generally show the majority of Americans favor keeping DACA from deportation. It is estimated it would cost more than $6 billion to replace deported DACA recipients in the U.S. workforce. Dozens of major U.S. corporations have also supported DACA. Tech giant Apple, for example, said it employs close to 500 Dreamers and was “glad” the Supreme Court ruled in DACA’s favor.

Close to 700,000 undocumented immigrants currently benefit from DACA. To qualify, they must have entered the U.S. before age 16 and not be older than 31 when the executive order was signed in 2012.

Most DACA recipients are from Mexico and Central America. However, close to 10,000 were born in the Caribbean. Jamaica has the most with more than 2,600, according to U.S. Citizenship and Immigration Services (USCIS) statistics released 2017.

DACA recipients were usually taken to the U.S. without their consent. Yet they now call the U.S. home and are allowed, among other benefits, to attend school, get jobs, buy homes and receive a driver’s license, as long as they do not commit crimes.

They also pay taxes and many are currently on the frontline as healthcare workers in the fight against the novel coronavirus pandemic (COVID-19), which has infected more than two million and killed over 120,000 in the U.S.

Dreamers, however, do not have a direct path to U.S. citizenship.

Last month’s Supreme Court decision was claimed as a major victory for DACA recipients, who had been placed under a dark cloud of uncertainty by the Trump administration and threatened with deportation.

Trump, who is up for re-election in November, had promised in 2017 to end DACA, which his administration claimed was a result of presidential overstep by Obama. The court’s decision drew the president’s anger.

“Do you get the impression that the Supreme Court doesn’t like me?” Trump stated on Twitter after the decision was announced.