FLORIDA – John Bell, the first Executive Director of the Caribbean Hotel and Tourism Association (CHTA), has been honored with the prestigious Lifetime Achievement Award at the Caribbean Hotel & Resort Investment Summit (CHRIS), which he was instrumental in launching. 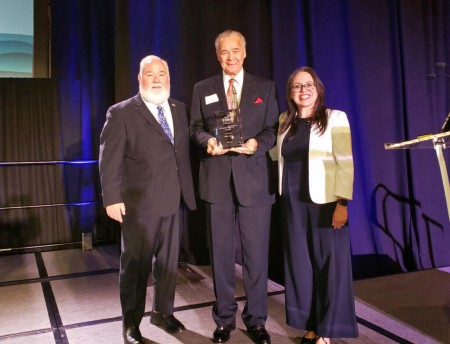 Vanessa Ledesma, CHTA’s Acting CEO and Director General, and former CHTA chief executive Alec Sanguinetti saluted their colleague John Bell in Florida. At left is Jeff Higley, President of the BHN Group, the organizers of CHRIS.The coveted honor was bestowed on Bell on Wednesday for his significant contributions to the hospitality industry. Fellow tourism legend and former CHTA CEO and Director General Alec Sanguinetti accepted the award on Bell’s behalf.

Among his many achievements, Bell, who was the guiding force of CHTA (formerly the Caribbean Hotel Association or CHA) for 29 years, was lauded for recognizing the critical need to get investors and financial institutions engaged in the Caribbean hotel sector. He launched the first investment conference in 1997, triggering prolific growth in the region’s leading sector.

“We thought that it would be a good idea to bring the financial community into some kind of a direct contact with the hotel industry (so) we decided the best way to do that was to partner with another company, which in that case was the Financial Times of London,” Bell said. “We got them to become involved and use their clout to bring in the different players … and it worked extremely well,” he added.

In her tribute, current CHTA President Nicola Madden-Greig noted that “it is not often that we get to honor living legends in our field,” adding that Bell’s vision and energy “framed the key role of tourism in the economies of the Caribbean.”

Frank Comito, who served as CEO and Director General of CHTA until January 2021, described CHRIS, which Bell envisioned more than 25 years ago, as “the single most important factor which contributed to the phenomenal growth of Caribbean tourism.”

Comito asserted the growth and development of Caribbean tourism “stands on the broad shoulders of John Bell, whose drive, vision, and persuasive nature over three decades laid the foundation on which we continue to build today.”

Vanessa Ledesma, CHTA’s Acting CEO and Director General who was originally hired by Bell, pointed to the catalytic role the investment summit played in the development of Caribbean economies.

She cited The Bahamas, Dominican Republic and Jamaica as key beneficiaries as early host destinations for the investment conference in the 1990s.

“These destinations and the region have much to be grateful to John for his leadership, which helped to propel tourism’s growth throughout the Caribbean,” Ledesma said.