The walls of the Palmetto Bay townhouse-style business condominium which houses the office of Caribbean Today, are decorated with trophies and plaques from a range of organizations thanking both the newspaper and its publisher Peter Webley, for services to the community. 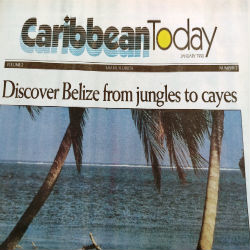 Occupying a place of pride among them is a plaque titled:

Caribbean Today is making waves, coming along for the ride.

The frame contains a copy of the Miami Herald article which announced the arrival of the new publication, with a photograph of Webley and some members of staff.

December’s opening statement from Caribbean Today’s publisher Peter A Webley is a rallying cry: “From plumbers to physicians we must go on, from lawn men to lawyers we must go on. Go on to build a better life for ourselves and for the society that we now live in.” Webley, 28, publishes the new monthly newspaper from the cramped Florida room turned office of his southwest Dade home. Five years ago, he delivered newspapers for Miami Today. Now he runs his own.

It cost $4,000 to produce 10,000 copies of the first issue, which was distributed last month throughout south Florida and in Atlanta, Houston and Kingston, Jamaica. 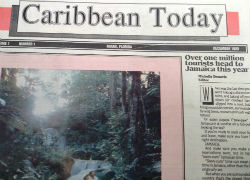 That was possible through “savings and mortgaging my soul,” Jamaican born Webley said, sipping imported Jamaican kola champagne. The paper’s staff of eleven includes former co-workers from the Kendall Gazette, where Webley was the Advertising Manager until September. Caribbean Today editor, Michelle Dreseris is also an assistant editor at the Gazette.

“It’s not an easy job, starting a newspaper,” Webley said. “You’re coming out of a $30,000 plus job here, poorer than a lot of people, but at least I have something going I hope to build.”

In recent months three other newspapers were started in Fort Lauderdale and northwest Dade, all targeting the same audience, and worse, the same advertisers, said Caribbean Lifestyles publisher, Noel Robinson.

“If we all stay in Miami, no one’s going to make it,” said Robinson, who’s monthly magazine has a distribution of 10,000.

But Webley said he made a profit in his first issue. He said his paper’s intent to cross over to American readers separates Caribbean Today from other competitors.”

David Rowe, a Holland and Knight law partner who cohosts the Caribbean Issues program on WVCG Radio 1080says Caribbean Today’s professional look and feel give it potential. The paper may help fill a void in the media, he said, but it needs direction.

“The editor needs to development an analytical and socially conscious editorial direction,” Roe said. “She (Dreseris) needs to address the problems and needs of the West Indian in South Florida.”

The next issue, scheduled for publican in the next two weeks, will be available at Caribbean area restaurants and business. The paper is free in Miami.

Caribbean Today’s mission, said editor Dreseris is to unify the disparate voices from the Caribbean. “Now, more than ever, Caribbeans needs to come together,” Dreseris said.

None of the publications mentioned in the Miami Herald article have survived. And In the 30 years since the first issue of Caribbean Today, several other newspapers targeting the Caribbean-American community have come and gone.

A 30th Anniversary Celebration will be held at the Miramar Cultural Center, 2400 Civic Center Place,, Miramar, Florida on Saturday, December 1.