“I think acting found me. And, it was a pivotal event in my life that got me on that path: I got pregnant quite early, at 15. When you get pregnant so early and live in the ghetto, yuh done! It’s either you get a stall and sell scallion and bag juice, but you done”.

Words of reality from Jamaican actress Audrey Reid in a recent interview with Caribbean Today.

Reid was born in Franklyn Town, East Kingston in an environment she refers to as “typical ghetto runnings”. Brought up by a single mom, she and her 4 brothers and mother lived in a tenement yard with many others in the yard. And characteristic of this kind of environment, there was only one outdoor toilet for the entire yard.

“My mother, Gloria May Hibbert, she was strong and resilient, and always looking after her kids. The last one, my baby brother, was killed in Franklyn Town at 17. So, the struggle was real. And, to add insult to injury my mother, with her own children, took on the role of caring for another child, my baby girl”, Reid explained.

Reid and her family would eventually moved to Vineyard Town. It was here where she met female comedian Hyacinth Clover who lived on the adjacent street. Clover was rehearsing a new stage production at her house, and this is where Reid took solace.

“I used to go to their house to watch the rehearsal every night, with my baby on my hip. It was therapy for me, it was a kind of escape”, remarked Reid. “They were doing a play called Obeah Wedding. One night the lead actress couldn’t come, so the producer, Ralph Holness, said to me ‘every night you are here with your baby, come and play the part, you must know it by now’. And you know, I knew every line. That was the beginning of my love affair with acting”, Reid smiled.

The accidental actress was so good, such a natural that Holness asked her to become the understudy for the lead actress and eventually started alternating her in the role.

Reid went on to do other plays with the producer such as Village Rooster, Under Mih Nose, Conman, and more.

“One night we did a play at the Ward Theatre and the crowd stood on their feet at the end. That’s when I knew for sure that this was my path.”

It was during her time at the Ward Theatre that she discovered Pantomime. Relishing in the singing, the movements, the costumes, Reid made a promise to herself. “I will be in the next Pantomime.” The following year, 1984, she saw ads inviting auditions for Pantomime, to which she applied and auditioned. She was in!

By this time, her acting ‘chops’ was getting accolades. So, it was no surprise when renowned Jamaican actor Oliver Samuels and the late Kenneth Fennel sought her out for the female lead in their play Boy Blue. After the play’s run in Jamaica, Reid started touring abroad with Samuels and the production to places like Cayman Islands, Canada, and England. This was her first time leaving the island.

“Working with Oliver wasn’t just about the plays. It was like a school of acting. I learned the art of theatre, knowing your position onstage, costuming, lighting, and most of all discipline. I couldn’t afford drama school, so I got my training through Oliver Samuels”, said Reid.

She was invited back to England to play the lead role, Vennette, in the popular play Boops. This is the production that made her a household name amongst the Jamaican and wider Caribbean community in the UK. More productions followed, cementing her name in Jamaican theatre at home and abroad. 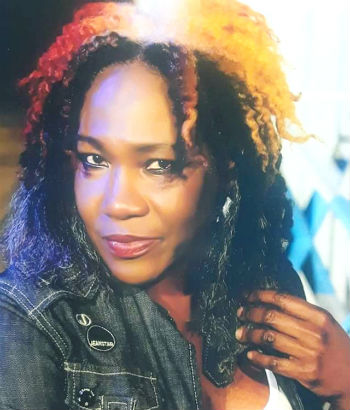 While in England, Reid got a call from directors representing Chris Blackwell. They wanted her to audition for the lead role in a movie to be filmed in Jamaica. Always being pranked by her colleagues, Reid dismissed the call. But, the caller was persistent, trying several times. That’s when it hit the actress, this is real! She auditioned for the role of Marcia, the female lead in Dancehall Queen. And as they say, the rest is history.

“Marcia was my height, she was about my age, same colour, from a ghetto background. It felt like when they were writing this script they had me in mind. It just felt right for me”.

Reid was now a film star! Other film roles followed. Recognised wherever she goes, the larger-than-life personality was recently honoured with an International Women’s Achievers Award in Canada. She will also be lauded for her contribution to Jamaica’s entertainment industry by the Queens of Reggae Island Honourary Ceremonies. As well, Reid will be celebrated by her alma mater, Vauxhall.

Busy with ongoing projects, Reid is about to embark on a new production, so look for her on stage, on screen.