Archbishop Tutu Was a Champion of Racial Justice

Trinidadian Steve Dixon, who met Archbishop Tutu, stated that it was with deep sadness that he learned of the passing of the South African Anglican clergyman and passionate anti-apartheid crusader. Archbishop Tutu died at a care home in Cape Town on 26th December 2021, aged 90. He was laid to rest at a state funeral which was held on New Year’s Day. 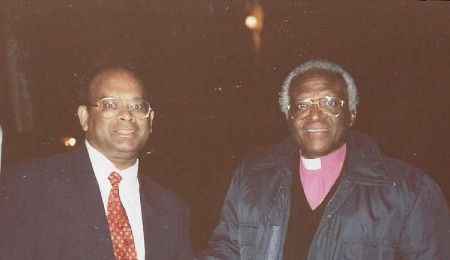 Mr. Dixon, 70, said, “I had the great honor of meeting this extraordinary racial justice and equality icon, who at the same time was quite an affable and a down-to-earth person.”

“Archbishop Tutu, a teacher turned theologian, rose to international prominence as a leading and eloquent opponent of apartheid, and supported economic sanctions to achieve majority rule in his native South Africa,” he added.

“Archbishop Tutu was the moral voice for justice and against segregation in his South African homeland. He worked tirelessly for its downfall through non-violent action. Undoubtedly, his righteous activism brought hope to his oppressed people and played a key role in bringing down that undemocratic and brutal system in the mid-1990’s. In recognition of his important work, the charismatic Archbishop Tutu was awarded the 1984 Nobel Peace Prize for his role as a unifying leader figure in the non-violent campaign to resolve the problem of apartheid in South Africa,” Mr. Dixon commented.

Mr. Dixon, a retired civil servant, remarked, “I was fortunate to have met the esteemed Archbishop Tutu after an event in New York in 1994, and he was a very warm and friendly person and easy to talk to, notwithstanding his fame. He was small in stature but a giant fighter for democracy in South Africa.

“Archbishop Tutu was a fearless leader who challenged the unjust apartheid system which held its evil grip on his beloved South Africa for a long time. No one could silence him. He was also a man of peace and reconciliation. Certainly, he will be remembered as a champion of racial justice. The world will miss him.

“Recently my wife Jenny Commissiong-Dixon and I sent him a Christmas greeting card with a note and we were hoping to hear back from him. Now, we are extremely saddened by his passing, and we offer our heartfelt condolences to his loving family. It was truly a distinct honor and privilege to have met this great man. Rest in peace good and faithful servant of God.”