A Pilgrimage to Pearson

NEW YORK - In 1988, a scholarship to study for an International Baccalaureate diploma in British Columbia, Canada, took me away from the comforts of home in Barbados at 16 and literally and figuratively changed the trajectory of my life. 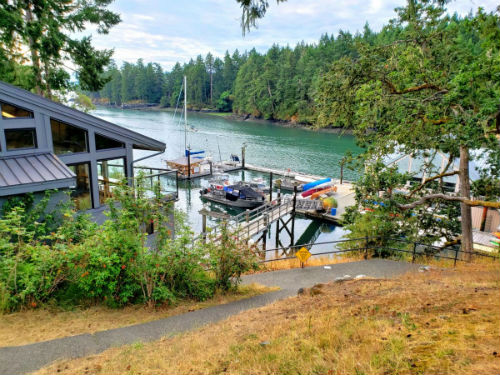 Pearson College is located along the forested shores of the Pacific Ocean at Pedder Bay.The journey to Lester B. Pearson College of the Pacific on Vancouver Island began the day my mother whisked me away from playing with friends in the Bajan heat to tell me I had been shortlisted and needed to be at an interview with the school's selection committee that same day.

Shortly thereafter, my days of dashing around in the Caribbean sun on tennis courts and playing fields were replaced with two years of living and studying with about 300 gifted students from Saskatchewan to South Africa, from Spain to Sierra Leone, and from Thailand to Turkey.

The "disruption" of Pearson College expanded a young person's thinking, allowing boys and girls from different ends of the earth to shape - and reshape - their worldview, to grow and mature, and to forge lifelong relationships with their United World College (UWC) family members across the planet.

Having attended reunions at the 10-year and 20-year intervals, I was resolved to attend last month's 30-year activities, but the demands of my profession threatened to keep me from attending.

Thanks to the urgings of my late mother (in spirit), my father, my wife (also a UWC graduate) and some fellow students, I juggled assignments and was able to make arrangements to attend the reunion.

As they say, "memories don't leave like people do", and emotions were at an all-time high for the close to 70 graduates who assembled on the West Coast of Canada for a few days of bonding, reminiscing and melding disparate experiences and perspectives into consensus on topical development issues.

A couple of days before arriving in Victoria, I attended the National Association of Black Journalists convention in Miami, where my company was producing a workshop on the ties that bind African Americans and Caribbean Americans. Near the end of the session, a Canadian Broadcasting Corporation journalist made a thought-provoking comment about the importance of embarking on a Caribbean discourse which transcended our tropical beauty and celebrated our creative intellect as a people.

Later, I approached the journalist in the hallways of the convention venue. During our conversation we shared our common Canadian ties and discovered that my director at Pearson College had been his Canadian high school headmaster, three decades earlier.

At the reunion in British Columbia, my former college director and his wife both confirmed remembering the Canadian journalist as a youngster. Interestingly, I also learned that one of my Pearson schoolmates, who was within earshot of the conversation, also had studied with the broadcaster during his high school days in Ontario.

While some people may think of these as interesting occurrences, a dear friend once taught me that there are no accidents or coincidences in life. For me, interactions such as these simply confirmed that I had made the right decision to head "home" to Pearson College.

And so, as I returned to the demands of my career after three days of energized engagement, it remained a struggle to describe the depths of the experience. As one fellow graduate put it, "what this journey has meant to me ... these words don't do it justice. For experiences like this, we need a new language."

What I can unequivocally express, however, is that another form of disruption has taken place, and I shall not wait for the 40th reunion to better align my life with the goals of UWC, which "makes education a force to unite people, nations and cultures for peace and a sustainable future."

Our destinies are tied to our relationships, and we ought to spare no effort embracing and encouraging those friends with whom we have journeyed through life. We should also explore common ties and synergies, especially those which can be leveraged for the betterment of communities everywhere, whether they are near or far from the places we call "home".

Thank you, Pearson College, and above all, thank you, Lord, for reminding us that we are part of something much greater than ourselves.

We give thanks as the journey continues.