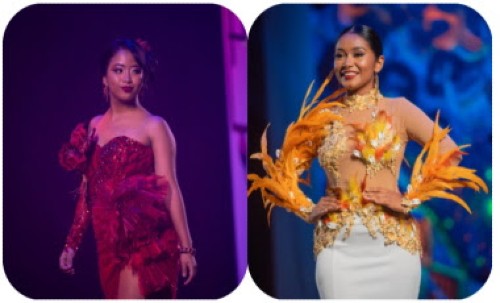 Amber Andrews from Moraikobai village (left) was replaced as queen by Kristie Emma Rambharat from Region Seven (Photo courtesy News Room)Andrews, who represented Moraikobai, the Amerindian village located in Mahaica-Berbice, was later told that the person adding up the scores in last Saturday’s pageant did so incorrectly.

The Ministry of Amerindian Affairs, which organizes the pageant, later announced that the winner is  Kristie Emma Rambharat from Region Seven and made no apology to Andrews over the controversy.

It said that the judges’ score sheets “were tabulated incorrectly by the Tally Clerk which resulted in erroneous figures” and that the final scores were tabulated based on a compound scoring system, which included tabulating the total scores for the six segments plus the final question.

After a “thorough and accurate investigation” and an auditing of the judges’ score sheets was conducted, the Ministry said Ms. Rambharat was found to have scored 768 points and thus is the new queen. As per the audit, the scores released by the Ministry puts Ms. Andrews as tying for fourth position with the delegate from Region Six, it said adding that the pageant continues to serve as a platform for empowerment of young Amerindian women across the length and breadth of Guyana..

The Ministry of Amerindian Affairs did not say if another crowning ceremony would be held for the queen but said there will be a prize giving ceremony on Monday.

However in a Facebook post, the former winner said she was as shocked as everyone else and spoke of the “emotional damage” and that what transpired after she was crowned was no fault of hers.

“It is an embarrassment. I was publicly humiliated. NO ONE deserves this,” she wrote on her Social media page.