West Indian American Carnival is Back in New York 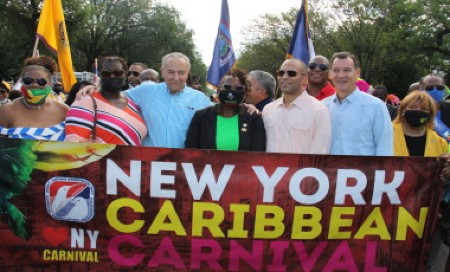 WIADCA said in a statement that the “legacy returns to Brooklyn’s famed Eastern Parkway for the 55th celebration of New York Carnival.

“Produced by WIADCA, from Thursday, September 1st to Monday, September 5th, patrons can expect an exciting week-long lead-up of Caribbean food, culture, music and heritage ahead of the iconic West Indian Carnival Parade,” the statement said.

“Are you ready to experience North America’s largest presentation of colorful costumes, sweet steel band music and a Caribbean cultural roadshow?” it said, adding “thank you for your continued support, as we celebrate the in-person return of New York Carnival 2022 to the city,” WIADCA said.

Last year, Caribbean Carnival lovers and masquerades, who were anticipating the usual, massive Caribbean carnival parade on Brooklyn’s Eastern Parkway on Labour Day Monday, had to settle for a relatively short walk, as organizers of the annual spectacle cancelled the gigantic event for the second successive year because of the COVID-19 pandemic.

Instead, politicians, a handful of service and community organizations, masqueraders and the press were among more than 200 people who were allowed by WIADCA to march Labour Day Monday morning, for just over an hour, along Eastern Parkway.