Kingston, Jamaica - After a hugely successful year, Bob Marley 75 continues into 2021 with several birthday celebrations leading up to Marley's 76th Birthday on February 6, including a global virtual birthday celebration hosted by the Bob Marley Museum, a Bob Marley Tribute Livestream by Stephen Marley, a limited edition release of Songs of Freedom: The Island Years, and a day of specialty programming on SiriusXM’s new Bob Marley’s Tuff Gong Radio channel. 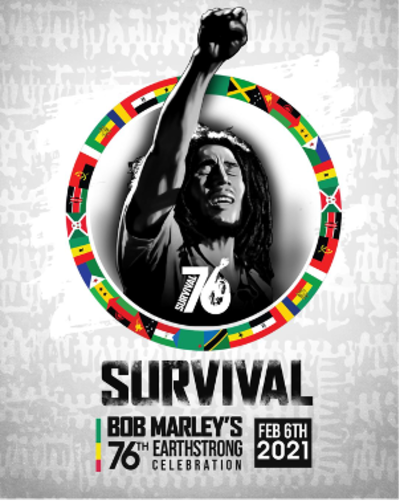 Despite the current “virtual reality” living conditions, viewers will still be able to experience the traditional segments for which the Bob Marley Museum annual event is known, starting with the Morning Ceremony which includes the blowing of the abeng and the nyabinghi drummers. Other presentations include "In the Marley Kitchen'' (featuring Chefs Brian Lumley from District 5 at R Hotel and Kush Tafari from Kushites Vegetable Cuisine) story reading, yoga, a children's sing-a-long and much more.

Hosted by ZJ Sparks and Ity Ellis, the Reggae Jam Sessions that comprise the second half of the day will feature a blend of newly-recorded and highlight performers from previous years. In addition to those already mentioned, the stellar lineup of revisited performances includes Marcia Griffiths, Capleton, Jesse Royal, and Koffee, just to name a few.

Produced by the Bob Marley Foundation in partnership with other Marley family entities and Jamaica’s Ministry of Culture, Gender, Entertainment and Sports; the virtual celebration will be available on Tuff Gong Television/YouTube as well as all MCGES social media platforms.

Bob Marley's Tuff Gong Radio on SiriusXM will also join in the birthday festivities on February 6 with a special "All Bob, All Day," format playing only music from the Bob Marley repertoire in between a series of special programs that begin with a new children's show hosted by Ziggy Marley inspired by Ziggy's Grammy-winning Family Time album and the recently-released follow up More Family Time. Additional programming will feature an exclusive "Survivor 76" party mix from DJ GQ, as well as highlights of the annual "Reggae Jam Session" concert, which traditionally closes the annual birthday celebrations at the Marley Museum in Kingston. In addition, Kenny Chesney will help celebrate Marley's birthday by joining the illustrious roster of Guest DJs previously featured on the channel. Special programming will continue to air on the channel beyond Marley's birthday in honor of Black History Month.

Plus, Ziggy Marley will also be joining Malcolm Gladwell in conversation about his book, BOB MARLEY: PORTRAIT OF A LEGEND, in honor of Bob Marley's birthday.  The glorious oversized book collects more than 150 photographs that celebrate the life and influence of reggae's forefather and one of the greatest musical and sociopolitical icons of twentieth-century pop culture. The virtual Live Talks Los Angeles event will take place Saturday, February 6, 2021, at 5 pm PT/8 pm ET. For tickets or more information, click HERE.

On January 28, CEEK Virtual Reality and Tuff Gong announced a special Stephen Marley virtual performance, celebrating Bob Marley 75. As one of the final pieces of this year-long celebration, the Grammy® award-winning Jamaican artist performed legendary Bob Marley's songs. The performance is available now on Bob Marley's official YouTube channel and www.ceek.com, as well as a Q&A on the CEEK VR App streaming platform. "In these uncertain times, it brings me great joy to be able to work with a platform like CEEK VR to spread One Love across the globe," says Stephen Marley. The concert is also available in 360VR on CEEK's Virtual Reality platform. The intimate concert will be a global event, bringing together fans under one virtual platform.

Just in time for Marley's birthday, the highly acclaimed Songs of Freedom: The Island Years, an extraordinary 6LP set, as well as a 3CD set, will be available worldwide on February 5. A limited-edition color 6LP set featuring two red, two green, and two gold vinyl LPs is also available.  Streamlined to the period of Bob Marley's emergence and stardom, with rare tracks on vinyl for the first time outside Jamaica, Songs of Freedom: The Island Years is available to listen to or order HERE.

In this digital era, Bob Marley remains one of the most followed posthumous artists on social media, and SURVIVAL76 serves to bring his music and message to the digital foreground, reaching new audiences and perspectives with innovative content and groundbreaking technology. Special live events, exclusive digital content, recordings, exhibitions, plus rare and unearthed treasures will also be revealed throughout the year. Bob Marley's music continues to inspire generation upon generation, as his legacy lives on through his message of love, justice, and unity, a sentiment needed more than ever in 2021. In conjunction with Tuff Gong and UMe, a division of the Universal Music Group, the Marley family will continue to ensure the highest quality, integrity, and care is taken to honor Bob's legacy and to celebrate one of the 20th century's most important and influential figures.