PARIS, France – The United Nations Educational, Social and Cultural Organization (UNESCO) says its program, Transcultura: Integrating Cuba, the Caribbean and the European Union through culture and creativity, funded by the European Union, has joined forces with the Goethe Institute and the Centre for InterAmerican Studies of Bielefeld University in Germany to showcase “The Caribbean hip-hop beat in Europe.” 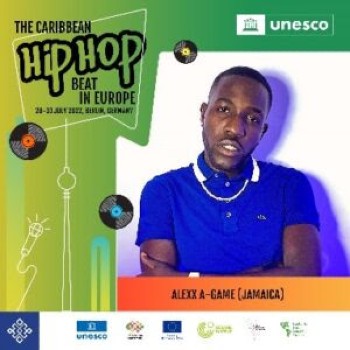 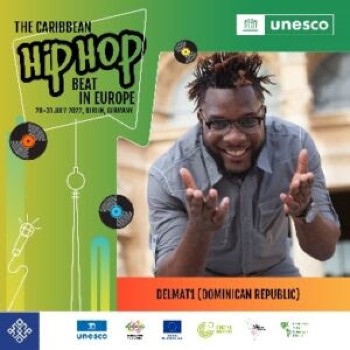 On Wednesday, UNESCO said that this event will be held in the framework of the inter-regional festival and symposium “Re-inventing Europe from the Caribbean. Urban cultures, translocal identities and social movements in the Black Atlantic,” which will take place at SAVVY Contemporary in Berlin, from July 28 to 31, 2022.

Selected by means of an open call, and sponsored by UNESCO Transcultura, the Caribbean hip-hop artists Alexx A-Game, from Jamaica, and DelmaT1, from the Dominican Republic, of Haitian descent, will have “the opportunity for the first time to perform in this important inter-regional artistic event,” UNESCO said.

It said the artists will join the participating Cuban hip-hop artists supported by the Goethe Institute.

UNESCO said the festival and symposium, organized around the thematic of the Cuban hip-hop scene under the name of #hiphophavanaberlin, will widen its scope in 2022 to other Caribbean artists, thanks to the UNESCO Transcultura program.

“Thanks to the UNESCO and its Transcultura program, the Goethe Institute can connect with artists and other cultural players in the Caribbean, a region ingeniously productive in arts and culture,” said Michael Thoss, Goethe Institute representative in Cuba.

UNESCO said this event will provide artists with exposure to the European market, making the most of attendance to the festival and symposium by stakeholders from the European hip-hop scene.

“It will give Caribbean artists an excellent platform to showcase their talent,” it said in a statement. “It will further foster creative dialogue and entrepreneurial networking with Afro-diasporic and migrant youth in Europe.

“In this way, artists will be able to create a cultural space for themselves, using hip-hop as an intercultural bridge,” UNESCO added.

Alexx A-Game said: “This UNESCO Transcultura opportunity is a very significant mark in my career and my upbringing as an artist because of what the Transcultura program represents in bridging gaps, and that is synonymous with what I’ believe in. I am happy to be a part of this exchange.”

In addition, UNESCO said hip-hop will be presented as a cultural tool of resilience and advocacy against social exclusion, racism, sexism, colonial heritage and persisting inequalities by providing “underrepresented voices with a platform to make their experiences, life stories and artistic products more visible in the European context.”

“To me, the most important thing is to represent my people abroad, to make it possible for my music to reach different audiences, and to tell people in other countries about the reality that we live in the Dominican Republic,” DelmaT1 said.

“I’m very grateful to the UNESCO Transcultura program for giving me the opportunity to participate in this contest and to be selected to represent my people,” he added.

Alexx A-Game is a solo artist, former lead singer and bass player of Di Blueprint Band, 2012 winners of the Global Battle of the Bands, UNESCO said.

It said he has created a unique sound which fuses different styles and genres of music to transmit his message, while still managing to maintain his original Jamaican sound and influence.

UNESCO said Transcultura “harnesses the Caribbean’s rich cultural diversity and turns it into a driver for sustainable development, through exchange and cooperation in the region and with the European Union.”

The program is built on two strategic areas of action: focusing on strengthening the skills and capacities of young cultural professionals and enhancing opportunities through knowledge transfer and exchanges, UNESCO said.

It said the symposium/festival #hiphophavanaberlin at SAVVY Contemporary in Berlin is dedicated to the social and transnational dimensions of hip-hop as a “diasporic lingua franca” (El-Tayeb).

UNESCO said musicians, DJs, activists, artists and researchers from Havana, Berlin, Jamaica and the Dominican Republic will engage in a dialogue about the importance of hip-hop for the creation of a “global Afro-diasporic counter-discourse and resistance through lectures, panel discussions, film screenings and live performances.”

The event will feature concerts with musicians from Havana, Berlin and the Caribbean, “representing the wide spectrum of international hip-hop sounds in the 21st Century.”