Third Horizon Film Festival (THFF) is an award-winning festival that has set a standard for showcasing quality and creativity as it presents a platform for Caribbean, diaspora, and underrepresented and marginalized global south voices in film. This year’s festival, the sixth one since THFF was founded in 2016, will open on June 23rd at PAMM, Pérez Art Museum Miami, with the Florida premiere of Cette Maison (This House), the first feature film by Haitian-Canadian filmmaker Miryam Charles, which had its world premiere in February at the Berlin International Film Festival. 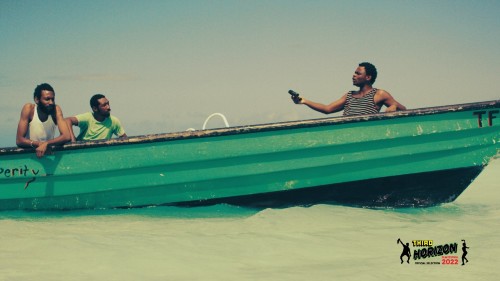 Still image from Chee$e, the latest film by Trinidad and Tobago’s Damian Marcano.In addition to PAMM, THFF22 will also take place at Little Haiti Cultural Center, where most of the festival’s lineup of seven features, plus 46 short and medium-length films divided among ten separate programs, will be screened. There will also be several panel discussions and a lecture.

Since Third Horizon's inception, Jason Fitzroy Jeffers and Romola Lucas have led a talented team of Caribbean people in presenting the four-day event. According to Lucas, who this year took the reins as the sole Festival Director, the films THFF screens represent “real stories that help you connect to yourself and help you to connect to other people. The Caribbean consists of several countries separated by the ocean. In most circumstances, water brings people together; in the case of the Caribbean, it does not bring people together because it's so prohibitively expensive to travel amongst the Caribbean countries, so these films are a way for you to travel throughout the Caribbean and its various diasporas.” Lucas also believes that THFF shows “how we are really connected. We may be on different pieces of rocks, talking in different colonial languages, but we are all one.”

Among the other features screening at THFF22 Is Lo que se hereda (It Runs in the Family), by Victoria Linares Villegas of the Dominican Republic. A personal documentary, the film explores family intrigue, history, and the intersection of sexual identity and culture. Using her family members, Linares Villegas traces her cousin's life, the late filmmaker  Oscar Torres, finding similarities between her reality and his.

Another feature being presented is Chee$e, the latest film by Trinidad and Tobago’s Damian Marcano. The drama, which had its world premiere in March at SXSW Film Festival, tells the story of a young man from a rural village who learns to make cheese yet must procure a way to earn more money, which leads him to the marijuana trade. The film includes the music of the popular music group Freetown Collective, who will give a live performance after the film.

Beyond the festival’s lineup of new films, there will be a retrospective of the work of the late pioneering filmmaker Sarah Maldoror (1929-2020). Born in France of Guadeloupean ancestry, Maldoror was the first Black woman to direct a fiction feature, Sambizanga (1973). A tribute to the anticolonial struggle that took place in Angola, Sambizanga will screen at THFF22 in a newly restored version, alongside nine other of Maldoror’s films. One of these, the documentary Aimé Césaire: Le masque de mots (Aimé Césaire: The Mask of Words), focuses on the founding father of the négritude movement, the Martiniquan poet Aimé Césaire. The film was made at the seminal Négritude Conference in Miami in 1987, at which black thought leaders from around the world met to re-examine a philosophy that supports black equality and the value of being different. A panel discussion marking the 35th anniversary of the conference will take place and will include Annouchka de Andrade, the daughter of Sarah Maldoror, who will be at THFF22 to present her mother’s films.