Miramar, FL- “Di Clash – Rumble in Miramar” brought true dancehall flavor to Shirley Branca Park as Tek 9 Sound narrowly defeated KyTek Sound to walk away with the winner takes all prize of two thousand dollars. Commissioner Alexandra P. Davis made the presentation and thanked the participating sounds as well as the cheering audience for their support. 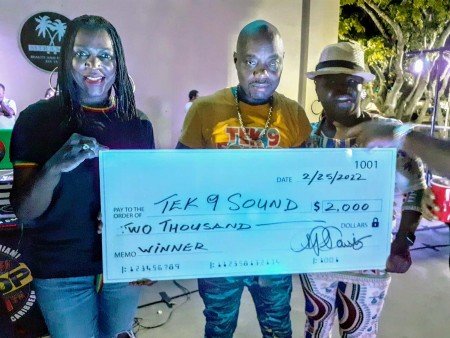 Miramar Commissioner Alexandra P. Davis (left) and West Park Commissioner Joy Smith (right) presents Tek 9 Sound with the winner takes all check after being victor of Di Clash - Rumble in Miramar last night. (February 25) at Shirley Branca Park.Over four hundred fans came out to enjoy an evening of dancehall vibes at the clash, which was one of the events being hosted by the Commissioner to celebrate February as Reggae Month and Black History Month under the theme “Black History Meets Reggae”.

It came down to one song. After a heated battle of “tune for tune” in the final round, the judges declared the competition tied and requested one final song as a tiebreaker, for the crowd to decide. Tek 9 used the opportunity to introduce a gospel dub which had the crowd going wild to undoubtedly take the winning position and walk away with the victory.

Di Clash – Rumble in Miramar was hosted by Tony Matterhorn who handled the night professionally, adding some humorous comments and shared some of his “World Clash” experience with the selectors in a subtle manner. Judges Walshy Fire, DJ Reem, Mikey Mike and Wesrock commented at the end of the elimination rounds, sharing their insights as they came to a consensus on the two finalists.

The night started with four sounds, Crystal Sound, Sting Movements, Tek 9 Sound and Kytek Sound playing a warmup round to set the tone for the night. Crystal Sound was the first to go, and Sting Movement was eliminated in the “Vocals” round which then left the final two to battle it out tune for tune.

Food vendors did brisk sale offering a variety of tasty delights as some relaxed in their lawn chairs and on blankets while others danced and cheered as the music vibrated throughout the park.

Support for “Di clash – Rumble in Miramar” was provided through the Miramar Parks and Recreation Department as part of the “Good Vibes” series, with support from Commissioner Alexandra P. Davis, The City of Miramar, WZPP/WZOP Radio and Riddims Marketing.