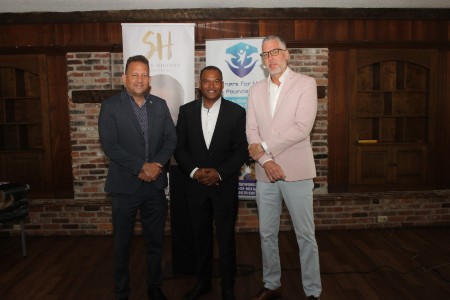 Launch of Steve Higgins Concert Series to celebrate Jamaica 60th Anniversary of Independence. From left: Consul General Oliver Mair, Jamaican tenor Steve Higgins and Philip Rose, Regional Manager, Jamaica Tourist Board all sharing the spotlight to launch the Steve Higgins Concert Series “Love and Nostalgia” celebrating Jamaica’s 60th Anniversary of Independence across the Diaspora.The performing arts event, commemorating Jamaica’s Diamond Jubilee, was officially launched last Monday (April 19), at the Robbin’s Lodge in Davie, Florida. The Tour Series “the Love & Nostalgia Tour”, is endorsed by the government of Jamaica, under the patronage of Jamaica’s Consul General to the Southern USA, R. Oliver Mair. The musical team includes tenor, Steve Higgins, and sopranos Dahlia Wynter and April Marr, who will also will be conducting workshops, and will participate in Multi-cultural Festivals and Concerts hosted by various Consulates, High Commissions and community organizations.

The Concert Series is expected to attract a diverse audience including Caribbean nationals, Americans, cultural enthusiasts, scholars and music lovers. This year, the tour will include major cities such as Houston, Birmingham (Alabama), Atlanta, Durham (North Carolina), Charlotte (South Carolina), Los Angeles, New York, West Palm Beach and Ft. Lauderdale then to London, Birmingham, Germany and Canada. “This Legacy Tour is an educational exposé on Jamaican folk music,” says Higgins,” features every aspect of Jamaican life including love, “labrish”, spirituality, slavery and celebrations. The songs are indigenous to Jamaica and come from a mixture of influences—Africa, Britain, Spain, the Maroons and Jamaica’s indigenous people, the Tainos.”

The songs will be featured in their cultural and historical context and the audience will have a chance to participate. Songs such as “Day-O”, “Manuel Road”, “Dis Long Time Gal”, “Colon Man” and “Fan Mi Soldier Man” will undoubtedly elicit feelings of nostalgia!

The Consulates of Miami and New York, the High Commissions of London and Canada are all partners of the Tour. Other partners, enthusiastic officials, corporate and media representatives at the launch all endorsed the Tour program. Special recognition was given to the quality work that Higgins has been doing as a Cultural ambassador in the Diaspora across the continents. Acknowledgements were made by Mayor Judy Paul (Davie), Consul General Oliver Mair, Philip Rose (Regional Director-Jamaica Tourist Board), Broward Center’s Gustavo Padrino, David Muir (Island Spaces Museum), Jacqueline Knight (Global Public Relations & Marketing Consultant-Top Klass Events) and president of the International Career and Business Alliance (ICABA)- Jerome Hutchinson. Jamaica’s former Honorary Consul to Houston, Ms. Beverly Ford also sent messages of congratulations.

The Jamaica-60 tour, sponsored by the Jamaica Tourist Board, Exotic Island Products and Clean-RET, is designed to be a narrative of Jamaica’s history through music and a way to pass the culture down to second- and third-generation Jamaicans. “We will reach the children of Jamaican ancestry and teach them their own culture, which they may be at risk to lose,” Higgins says. The events will be live and interactive to engage and enlighten all parties. “We know that sharing music and culture serves to further promote diversity and unite our people,” Higgins says. For the UK leg of the tour, the team will head to London and Birmingham before visiting other cities in Europe.