The Jamaica Cultural Development Commission (JCDC), an agency of the Ministry of Culture, Gender, Entertainment and Sport, celebrated the 64th anniversary of the birth of the late Reggae singer Dennis Emmanuel Brown, CD, on Monday, February 1, with a cultural gathering at his resting place, National Heroes Park, Kingston.The celebratory event began at 6:00 pm. 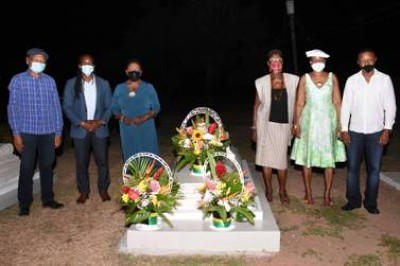 In her remarks, Minister Grangestated that, “The passage of time has not diminished our feelings of loss and that is because Dennis Brown's life was so important, so impactful and such a blessing to us all.” She further noted that, Dennis Brown was a “singer’s singer”,remembered fondly for his performances at events such as Reggae Sunsplash and the series he starred annually called “Inseparable”, which was a calendar item for music lovers.

In highlighting the schedule of events for this year’s virtual staging of the Reggae Month celebrations, Minister Grange noted thather team has worked tirelessly to make the celebrationas exciting as possible. She said there will be a global broadcast of Reggae Month TV onPBCJ Television, Jam Vision, Hon. Olivia “Babsy” Grange’s Facebook page, the Ministry of Culture, Gender, Entertainment and Sport's Facebook page andseveral other social media channels from 6:00a.m. to 10:00 p.m. daily.The programming will include a special treat of Dennis Brown in Concert at White River Bash. Minister Grange also revealed that a documentary has been commissioned on Dennis Brown’s life and career.

Dennis Emmanuel Brown, an internationally-renown Jamaican Reggae artiste was born on February 1, 1957 and died on July 1, 1999. His prolific career began in the late 1960s when he was just nine years old. Over his short lifetime he recorded more than 75 albums and was one of the major stars of Lovers' Rock, a subgenre of Reggae. Bob Marley cited Brown as his favourite singer, dubbing him "The Crown Prince of Reggae".