KINGSTON, Jamaica – The lead singer of the reggae group, Mighty Diamonds, was shot and killed during a drive-by shooting on Tuesday night, police have confirmed. 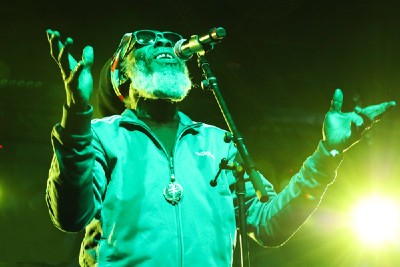 Tabby Diamond of The Mighty Diamonds. They said that Tabby Diamond was among two people killed during the incident and that three other people were injured during the attack in the St Andrew South community, south east of here.

Police said that the 67-year-old singer, whose real name is Donald Orlando Shaw, was among a group of people when gunmen opened fire from a passing motor vehicle. Tabby Diamond and another man, whose identity has not yet been released, were pronounced dead at hospital.

The Jamaica Observer newspaper reported Wednesday that the shooting has left members of the reggae industry in shock and grief, as Tabby Diamond was known to be a staunch Rastafarian who embraced the philosophy of peace and love.

The award-winning Mighty Diamonds are responsible for some of reggae music’s most memorable anthems including, Pass The Kouchie, Right Time, I Need A Roof and Heads Of Government.

Culture, Gender, Entertainment and Sport Minister, Olivia Grange, in condemning the “senseless” killing of the singer, said she had built up a special relationship with him over the years.

“The news about Tabby’s death has left me in shock. I have had a special and close relationship with the Mighty Diamonds over the years. I feel the pain of the other two Diamonds, ‘Bunny’ and ‘Judge’, who I know will never get over the loss of Tabby. I pray for strength for them always.”

“I recall when Tabby poured his soul into the Mighty Diamonds’ performance at Reggae Sunsplash in 1982. That live recording was actually made into an album. It was then you could tell that Tabby Shaw was a master vocalist. The group was nominated for a Grammy in 1983.

“Tabby’s killing is as senseless as it is tragic and leaves an awful void in the Jamaican music landscape. I express my sincerest condolences to Tabby’s family members, relatives, friends and associates and to the entire entertainment fraternity. May his soul rest in peace and eternal light shine upon him,” Grange said.