Kingston, Jamaica: Veteran Jamaican radio DJ Ron Muchette has recently inked a deal with the Caribbean Global Network (CGN) Group to be included among the roster of talent for the Group’s Jamaican expansion via the launch of a new station called The Bridge 99FM. 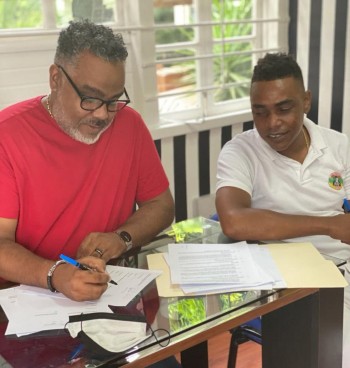 Contract signing...Bobby Clarke and Ron MuschetteThe Bridge 99FM is poised to help to build stronger ties between Jamaica and the Jamaican Diaspora in the New York tri-state area, thereby creating opportunities for a robust exchange of information, culture and trade. This is to be achieved, in part, by a simulcast of The Bridge’s programming by its sister station Irie Jam Radio, 93.5 FM - WVIP to its over 2 million-strong Caribbean audience in the tri-state area.

Ron Muchette, one of Jamaica’s most respected radio DJs and hosts, joins The Bridge 99FM team after over six years at Mello FM as a morning show producer and broadcaster. His addition to what is expected to be an all-star roster, will be a considerable boost as The Bridge 99FM works towards its mission of forging stronger linkages and community building.

CGN Group CEO, Robert ‘Bobby’ Clarke welcomed the new partnership with Muchette, noting, “We are delighted to have a DJ as admired and respected as Ron on board with us for the launch of The Bridge. I believe this is a testament to his support for what we want to achieve with this expansion - connecting Jamaicans throughout the diaspora to build Jamaica. I encourage everyone to look out for more news to come regarding the high-level talent we have on our team, and of course, tune in when we launch in July.”