KINGSTON, Jamaica– Jamaica's government has been slapped with a defamation lawsuit after the popular dancehall entertainer, Popcaan, filed court documents on Friday claiming that his action stemmed from a statement issued by the Jamaica Constabulary Force (JCF). 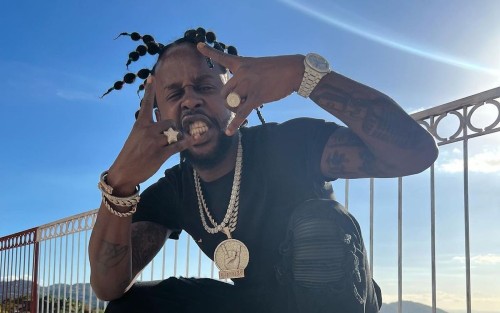 Dancehall artist PopcaanAttorney Bert Samuels, of the law firm Junior& Samuels, filed the lawsuit on behalf of Popcaan, whose real name is Andrae Sutherland. The suit names the Attorney General as the defendant.

The law firm had earlier indicated that a statement issued by the JCF on Wednesday regarding the entertainer and alleged legal issues in Barbados was false.

The statement was issued to explain the entertainer’s recent long wait for processing by immigration in the United Kingdom on Tuesday. But the law firm had warned that if the JCF did not issue an apology by noon on Thursday, a lawsuit would be filed.

Samuels, who is representing his client who is currently outside of the jurisdiction. said no response was received from the JCF and so the suit was filed.

The attorney said the only charge against Popcaan was for possession of marijuana in 2009, namely smoking a spliff (marijuana cigarette), and that had been expunged from his criminal records in Barbados.

Popcaan is claiming general damages, damages for defamation, interest, legal costs and any further relief that the court may deem fit.

Popcaan states he has never been arrested in Barbados or any other place for possession of a controlled substance and that his conviction in relation to marijuana was wholly expunged in Barbados on April 21st, 2016.

The lawsuit notes that Section 17 of the Criminal Records (Rehabilitation of Offenders) Act of Barbados stipulates that “A rehabilitated person shall, in relation to any expunged conviction, for all purposes in law, be deemed to be a person who has never been charged with, prosecuted for, convicted of or sentenced.

It was further notes that Section 22 of the Act makes it an offence, punishable by imprisonment, to disclose that a person whose conviction has been expunged, has committed, been charged with or convicted for an offence which was the subject of an expunged conviction.

The JCF is being accused of acting maliciously and that it failed to carry out any or any proper investigations in pursuance of the due administration of justice, or otherwise, before publishing the press release.

The entertainer is contending that the words used by the JCF meant or were understood to mean and conveyed to the public and ordinary, intelligent and unbiased persons with the ordinary person’s general knowledge and experience of worldly affairs that he was allegedly involved in criminal activity.