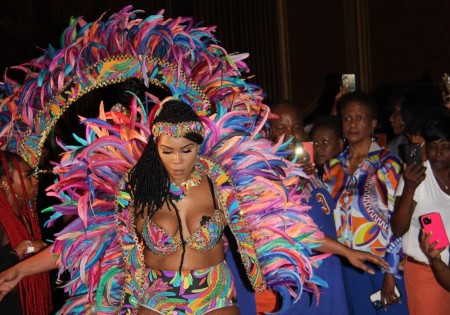 One of the costumes on display at the launch of Caribbean Carnival. (Photo credit: Nelson King)“I’m so happy to see the sea of people,” exclaimed Guyanese Ann-Marie Adamson, a member of WIADCA’s Advisory Committee, who served as Mistress of Ceremonies, at the newly-renovated and expansive King’s Theater on Flatbush Avenue in Brooklyn.

“2022 is the carnival you’ll never forget because we came out of COVID. So, I want to thank everyone who’s here today,” she added as she expressed gratitude to WIADCA volunteers and Executive Committee members and directors, including chairperson Guyanese Michelle Gibbs-Francis and a plethora of politicians on hand.

Caribbean American Congresswoman Yvette D. Clarke, who represents the 9th Congressional District in Brooklyn, said it was “only fitting that, in a time filled with so much turmoil, uncertainty, we can count on the West Indian American Day Carnival to continue and bring us all together as one united community”.

“The West Indian American Day Carnival is one of the largest carnival celebrations around the world, coalescing the young, old and everyone in between to participate in the festivities,” she said. “Every year, anywhere between one and three million people from around the world pack Eastern Parkway to eat food from across the Diaspora, listen to the sweets sounds of calypso and reggae, and watch dazzling floats with intricately costumed dancers.

“For members of this community, the carnival is far more than just an opportunity to party for a few days; it’s a celebration of our pride in our shared Caribbean culture and heritage,” added the daughter of Jamaican immigrants.

Clarke said she was greatly appreciative of WIADCA’s continued efforts to put together a program that represents the totality and diversity of the Caribbean Diaspora every year.

“And I am certain that this event’s 55th year will result in a resounding success,” she added.

Waving a miniature Grenadian flag, New York City Public Advocate Jumaane Williams, the son of Grenadian immigrants, said: “It’s exciting to be celebrating our culture. It’s exciting that the Caribbean community is moving forward…. Last year, we didn’t do this (in-person carnival). We went without any gun violence. We need to have another Labour Day without violence.”

WIADCA said its cultural partners/presenters are “working tirelessly to bring the pageantry of authentic Caribbean Carnival back to the road” this year. It said participating 2022 carnival bands/cultural leaders are presenting an array of costumed masterpieces.

Except for the Labour Day Carnival Parade, which takes place on Brooklyn’s Eastern Parkway on Monday, September 5, all other events, beginning on Thursday, September 1, will be held on the Brooklyn Museum grounds.

“This year our return to the parkway (Eastern Parkway) inspires us to continue the cultural work on behalf of our community, city, state and partners,” Gibbs-Francis said. “Without them, the mas’ and pan groups especially, we would not be here today.”

“Our losses were tough, but we stood stronger together to overcome by providing for others and producing several impactful community programs for youth, adults and seniors. As for our COVID protocols, we have several guidelines in place to verify vaccination and temperature checks,” she added.