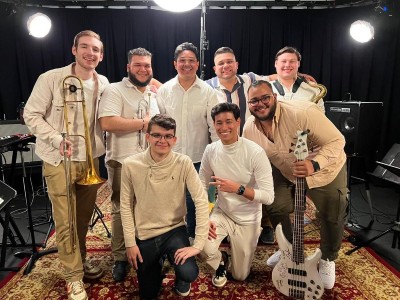 Latin Grammy winner Tony Succar and members of the Latin American Association of Berklee Students.Since its launch in September 2021, the Two Track series has showcased the talents of  members of the Berklee community in an intimate setting with only a microphone and a single, continuous camera take. Each weekly video premiere is centered around a theme; for the month of June, artists have had the opportunity to discuss the theme of “Pride.” In his monologue, Tony talks about moving from Lima, Peru to Miami when he was two years old, and how Latin music remained a foundational influence in his life throughout his childhood. Tony takes immense pride in sharing the colorful and life-giving sounds of Latin music across cultures with a global audience.

Indeed, Tony’s music, which combines elements of salsa, jazz, pop, and afro-latino-inspired styles, has brought him all over the world, and allowed him to play with a diverse array of legendary artists such as Tito Nieves, India, Jon Secada, Marc Anthony, Sheila E., and Judith Hill, among others. His 2021 film Great Performances: Roots of Latin Jazz, which he co-directed and co-produced, featured himself, Dr. Pablo Gil and the Raíces Latin Jazz Orchestra and tells the complex story of Latinx history and culture through the lens of Latin jazz. Most recently, Tony's album “Live in Peru” was nominated Best Tropical Latin Album at the 2022 Grammy Awards. Last year, Tony was also elected to the Latin Grammy Board of Governors for the South Florida Region.

You can listen to the full Two Track performance here: