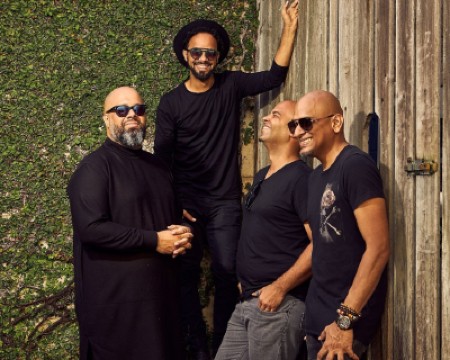 The versatile Kes The Band. will deliver its trademark energy and sound at Hookie DC Arcade.The beloved, returning Hookie Weekend 2022 produced by Hookie Life Entertainment will bring the energetic sounds of Soca and Dancehall music to the DMV with first-rate performances by fan favourites from the Caribbean region.

For 2022, Hookie Weekend commences with the kick-off party ‘Release Therapy’ which takes place on Thursday June 16th at the Ivy City Smokehouse and features US Virgin Islands Soca star Adam O known for his hit songs ‘Warming Up’, ‘Stress Bout Dat’ and ‘Wine and Dip’.

This is followed by the 11th edition of the weekend’s signature event ‘Hookie DC’, which happens on Friday June 17th at the venue, Gateway DC and is themed ‘Hookie DC Arcade’.

Known as the ultimate premium Caribbean pool party, ‘Hookie DC Arcade’ will display the evolution of the event which its organizers have promised to be unlike previous instalments.

The Hookie Life team shared that in addition to a full-sized pool, in keeping with the theme the event offers a full arcade of classic games, exclusive prizes from several spirit brands, multiple brand activations to appeal to various patrons as well as dozens of food, drink & apparel vendors.

Most notably, Hookie DC Arcade will provide a top notch line-up of international DJs and live entertainers headlined by the versatile Kes The Band. Kes, will bring its trademark energy and sound to Hookie DC with modern smash songs such as ‘Jolene’, ‘Liki Tiki’ & ‘Stage Gone Bad’ along with classics which include ‘Wotless’, ‘Where Yuh From’ & ‘Savannah Grass’.

Joining Kes The Band at Hookie DC Arcade is three-time International Soca Monarch Voice who is riding high on his 2022 hit ‘Out and Bad’ and Grenada’s Mr Killa famous for his animated appearances and Soca anthems, ‘Run Wid It’ & ‘Rolly Polly’.

Reggae & Dancehall music will also be well represented at Hookie DC by the dynamic Kranium and his catalogue of major singles such as ‘Nobody Has to Know’, ‘Wi Dey Yah’ and ‘Sidung’.

Possessing the capacity to pivot quickly and execute last minute changes, the Hookie Life team is ready and excited to professionally present these live performances as well as its other weekend events which highlight other aspects of Caribbean festival culture i.e. J’ouvert and Mas during Hookie Weekend 2022, June 16th to 20th in the DMV.