“If you think about the devil creating a room called temptation, it’s hip-hop — beautiful women, a lot of  money, a lot of drugs, everything that could distract you. But you have to be steadfast, that is not what I’m here for.” 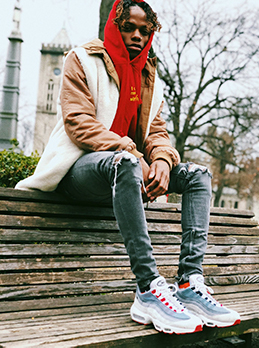 Wise words from Kalleem London, hip-hop artiste on the rise. In the United States just a few short years, Jamaican-born London is fast making a name for himself in an industry marked by fierce competition, and at times, brutality. Sure of his path, the young performer acknowledged that some of his music videos may glamourise negative images associated with the genre, noting “If you want to get a job that requires you to wear a suit, then wear a suit.”

Now Atlanta-based, the deejay knew he wanted to make music his career at age 16 while attending 6th Form at St George’s College in Kingston. Music was always in his blood he explained. As a youngster at Prep school, London was part of a group called The Backstreet Boys. But, at puberty when his voice changed he thought about it and the next logical step? Hip-hop, not dancehall.

“I said to myself, I’m in love with music, so how is it I never wanted to be a dancehall act? For one, I never think I looked enough like a ‘gunman’ to pull off the image to be a dancehall artiste. So, I started to study rap, how they talk, how they say their words, down to the linguistic aspect.

“I started paying attention to how Americans pronounce the letter ’T’ like the letter ‘D’. So, if I am going to rap, I thought, I would have to sound authentic. I did my research and it took a lot of practice to get to where I am today. So yes, from Prep school to 16 I made the decision even though Mom told me to finish college first. I did go to UWI, but I had to follow my path.”

Today, London is basking in the success of his music videos released on YouTube. Bad Mon, an anthem to the ideals of Jamaican youth, has surpassed 350,000 YouTube views, while Perseverance, a vote of inspiration to push through life’s complexities, is on the same trajectory with more than 100,000 views. The uniquely other-worldly feel of Extraterrestrial and mesmerising beats of Drunk together have garnered more than 240,000 streams on Spotify. 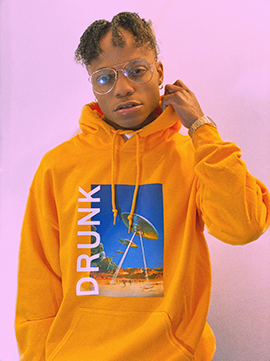 What makes London different is the many voices one hears in his music stylings. He seamlessly merges rap, pop, R&B, and reggae creating a sound that is uniquely his own brand, his own signature. With total creative control, the artiste writes his own music and lyrics, directs the videos, acts as creative director, and stylist on all his projects.

His interest goes way beyond entertaining though, this young man is serious about grasping the business behind the music. In fact, while he was at UWI (University of the West Indies) London signed up for courses in Music Business Management taught by one of his mentors, Ray Hitchins. He went on to take voice training and hired a vocal coach. The merging of his rap stylings would then give him an edge to create from a different space.

“I take inspiration from so many sources. In college, for instance, I did literature. So, I have this background in writing and creating stories. If I’m writing an emotional song I sit in a dark room and think about how someone would feel if they were going through an emotional experience. For party music, I have to dress up, I have to feel it. I become the characters in my music. My music is Kalleem personified,” he laughs.

Surprisingly, most of London’s influences are not musicians.

“They are people that make me understand that failure is not a real thing, and you can create the life you want just by believing, by acting on the ideas. Among those I take inspiration from is Aliko Dangote, the richest black man in the world. I also like Napoleon Hill, best known for his book Think and Grow Rich. Leonardo DaVinci, the Renaissance artist who painted the Mona Lisa, he added so much value to it. I don’t know how he did it, but I’m a trying to learn.”

He credits his Caribbean heritage for his focus and tenacity, noting that attending traditional Jamaican schools gave him a rounded sense of polish, but with grit. His supportive family too, he said, helped give him the push he needed.

“If God put me in such a home where my family really believe in me and help push me forward, I have no time to waste. I feel like the Jamaican blood that runs through me, gives me the grittiness that always seeks and grabs life now. I feel like I have an edge.”

London is clearly Grammy-bound. He sees himself with five of those music trophies by the end of the next five years. But, it’s not just about him.

“I have to go back to Jamaica, the community where I am from, the schools that helped shape me, any poor communities that need help. I am especially interested in uplifting the homeless. I want to create a foundation to support these people,” London underscored.

In the meantime he is doing all the hard and creative work to get there. Currently working on a six-music video project, lookout for more raw talent with an eclectic mix of genre fusion.