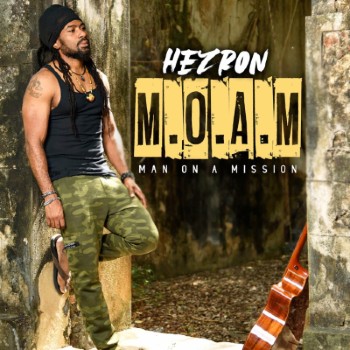 Ahead of the album release, Hezron has released three singles. Title track “Man on a Mission” is a song about his personal journey as a goal oriented person but also offers encouragement to anyone in pursuit of their dreams, despite the inevitable challenges, while also honoring the heroes all around us. “Tik Tok I’m Coming” appeals to his more sensual side channeling an r&b laced track reminiscent to Marvin Gaye’s “Let’s Get it On” and furthering the album’s incredible versatility is the most recent single “Save The Children”, released on June 24th, a heartfelt commentary on the alarming number of brutal acts committed against the youth, including physical and sexual abuse.

With inspiration from classic soul artists such as Luther Vandross, Otis Redding and Sam Cooke, to 90’s favorites KC and Jojo and Dave Hollister to iconic Jamaican singers Beres Hammond and Dennis Brown, Hezron has embodied his own classic vocal and musical style while taking notes from some of the greats.

Hezron released his debut album The Life I Live(d) on Tad’s Record in 2015. His return to the label with M.O.A.M. unites two established Jamaican brands, each committed to proving that quality reggae with the potential for widespread global appeal is still being made in the music’s birthplace. Although many younger Jamaican artists embrace trap and hip-hop over indigenous reggae and dancehall, a stark contrast to the proliferation of young American reggae bands, especially in California, Tad’s Record founder Tad Dawkins is determined to see Jamaican reggae restored to prominence internationally. It’s an objective he firmly believes will be fulfilled with the release of M.O.A.M. “Hezron is trying to pivot to a wider audience and propel his achievements to the next level. He has that fire in him and he is going to make it work because he is a man on a mission,” states Tad.

“M.O.A.M (Man on a Mission), in its truest sense, is a mission to bring back great Jamaican music and musicianship to the mainstream,” offers Hezron. “It’s a reminder of where reggae is supposed to be in the world.”