MIAMI, FL - As the legendary Galaxy P, aka Amunra, celebrates his 30th Anniversary in music this year, he reaffirms his grasp on Dancehall with the fiery new song "Gone in Deh" on the "Giggy Riddim" from producer Cassette Jones (Riddim by Clevie of Steelie & Clevie). "Gone in Deh" is buzzin amongst fans and has garnered incredible support from DJs and music lovers internationally. 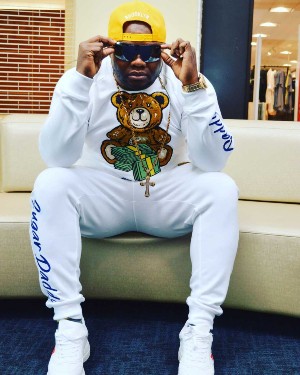 Dancehall artist Galaxy P.Truly an example of hardcore lyrical skills, "Gone in Deh" is the raw, unadulterated iteration of the growly voiced deejay we grew to love when he burst on the scene in the early 90's. With influencers, selectors, sound systems, DJs and producers hailing Galaxy P each time "Gone in Deh" drops, declaring "Gala yuh find it" amidst multiple pull ups -- it's clear that Galaxy P has a hit on his hands. And the timing couldn't be more perfect. As they say in this business and life in general -- timing is everything.

Galaxy P joins an all-star line up for the nostalgic "Giggy Riddim" including the likes of Wayne Wonder, Spragga Benz, Badda General & Tall Up, Delly Ranx and many more! Easily the hottest juggling on the road, Galaxy P is leaving an indelible mark on music with "Gone in Deh."

As if Galaxy P, born Peter Jackson, couldn't get hotter this milestone anniversary year, the uber talented entertainer offers fans an unmatched, real authentic Dancehall sound on his new, third studio album "The Boy from Macca 3." Through 13 amazing tracks, Galaxy P takes listeners on a well orchestrated Dancehall journey, solidifying his position amongst legends. The project, named after the small community he grew up in in St. Catherine, Jamaica, captures Galaxy P's classic sound with a modern day flow.

"My goal as an artist is to make timeless music that can play any day, anywhere for any listener," says Galaxy P.

"The Boy from Macca 3 features music that makes people dance, vibe and/or repeat verbatim....anyhow it reach dem is a win for me," the legendary act adds.

Nearly every track on "The Boy from Macca 3" is strong enough to be released as a single. Stand out songs include "Gi Mi Trubble," "Dea So," "Boring Gyal," "Hustla" and "Party Hard" among others. Much to his credit, fellow artist Badda General produced much of the songs featured on the album. In addition, Galaxy P's "Old Skalawa" on the "Blacker Shade Riddim" was produced by Badda General and Steppa Shawn of Triful Toones.

Galaxy P is one of the Dancehall genre's defining voices! The witty and lyrically intense deejay has given the world a slew of anthems like "Tickle Her Fancy," "Miss Goodie Goodie" alongside Colin Roach and many more -- boldly shaping the sound of 90's Dancehall. One can't go around the deejay's distinctive voice and contributions to the music and culture.

In 1992, The "Miss Goodie Goodie" deejay made history at Sting (one of the longest crowd roars and pull ups ever) and on the charts. Colin Roach’s sweet vocals contrasted nicely with Galaxy P’s rough deejay flow. The song was an international sensation. As a matter of fact, the song was so big that Johnny Wonder pressed a 12-inch with "Miss Goodie Goodie" on one side and "Coppershot" on the flip side to essentially "buss" the famed Bounty Killer's career in the U.S. market.

Music has been a refuge for Galaxy P all of his life. The artist is overjoyed that he can still entertain the masses, doing what he loves, for 30 years. "Here's to 30 more," says Galaxy P proudly!