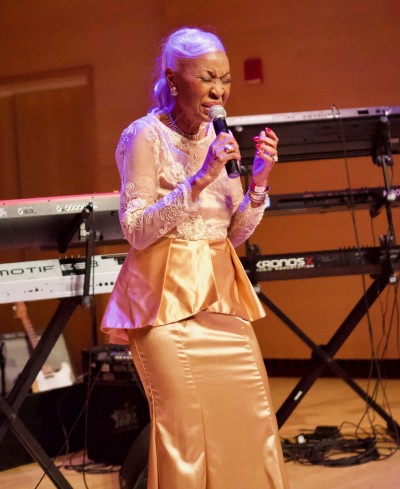 MYRNA HAGUE (Photo Credit: Leonard McKenzie)The show took place on Saturday September 10 at the Adelphi Performing Arts Center in Garden City and saw rising stars such as Kyle Julian and Majid Khaliq, as well as established performers including International Women in Reggae, Jenieve Hibbert and Myrna Hague bringing many members of the appreciative audience to their feet with exceptional performances across a range of musical genres.

Hosted by veteran broadcasters Irwin Clare and Sheron ‘Sheron P’ Pearson along with Ken Williams Jr, the event was produced by educator and musician LeRoy Graham Jr under the auspices of The True Tribute Organization Foundation Inc.

Production notes describe the event as ‘a celebration of Jamaica’s culture, history and development within the music industry and beyond , which seeks to honor the achievements of Jamaicans past and present who have shown dedication and commitment to sharing Jamaica’s cultural heritage and musical legacy with the world.’ The event also raises funds and awareness for several education projects in Jamaica and the USA developed through the True Tribute Organization Foundation Inc.

Kyle Julian’s energetic tribute to The Mighty Diamonds created a spark with the audience that continued when Jenieve Hibbert, daughter of the legendary Toots Hibbert, took to the stage to honor her late father with renditions of Bam Bam and 54-46.

International Women in Reggae, all dressed as ‘Ladies in Red,’ had the audience dancing in the aisles as they performed in honor of the late Sonia Pottinger- generally regarded as Jamaica’s first professional female music producer- before the elegant ‘Queen of Jazz,’ Myrna Hague, paid tribute to her late husband Sonny Bradshaw with jazz renditions of several classics, including the Barbra Streisand hit, The Way We Were.

In another, very different tribute to jazz, violinist Majid Khaliq delivered a lively virtuoso set which included his own jazz arrangement of Don Drummond’s ska hit Silver Dollar, which proved to be another popular highlight of the evening.

In addition to the aforementioned honorees, both Audrey Hall and Myrna Hague were surprise recipients of Lifetime Achievement Awards in recognition of their contributions to the development of Jamaican music.

Speaking following the conclusion of the event, True Tribute Organization Founder and CEO Graham expressed his appreciation to those who attended, both as honorees and audience members.

According to Graham, “We continue to be grateful to those we honored this year for their lasting contribution to the history and development of Jamaican music and culture and for allowing us the opportunity to preserve and document their achievements for generations to come.  Additionally, many members of our very appreciative audience have indicated that the evening was truly one to remember and that they are already anticipating next year’s presentation. That kind of endorsement is invaluable to us and to them we extend our heartfelt gratitude for their positive support.”

Part proceeds from this year’s event will go to The Sonny Bradshaw Foundation and The Jamaican Association of Veteran Artists (JAVA) both based in Jamaica.