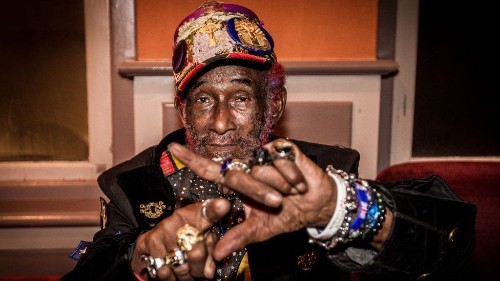 In a statement, Grange said that Perry who was a “giant of Jamaican music” died in the Noel Holmes Hospital in the western parish of Hanover.

“I have spoken with his son and other members of the family, and I can confirm the sad news ….his contribution to developing and propelling Ska, Rocksteady and Reggae has been mammoth.

Lee “Scratch” Perry,  started as an apprentice to the legendary ‘Sir Coxone’ at Studio 1 in the 1950’s and spent the rest of his life helping to develop Jamaican music. In addition to being an outstanding producer and singer,  he was also an inspirational figure who helped young singers and musicians to develop their craft.

“I recall his work with Bob Marley.  It is said that ‘Scratch’ helped with formulating Marley’s unique sound. The story is told that ‘Scratch’ gave his ‘Upsetter’ band to Marley and that band later became known as ‘The Wailers’, ” said Grange.

Some of Lee Perry’s great works with The Wailers have included ‘Duppy Conqueror’, ‘Small Axe’, ‘Rastaman Live Up’, and ‘Jah Live’.

Lee Perry produced an impressive body of work that charts the evolution of Jamaican music — with more than 1,000 songs over 60 years.  His latest release in 2019 was a 12-track album, ‘Heavy Rain’ that topped the Billboard Reggae Album Charts.

“What a man, what a music, what a life, what a genius!  I am incredibly saddened by his passing, but I will continue to celebrate his genius and the body of work he’s given us. I express sincere condolences to his widow, Mireille, his children, his entire family, friends, colleagues and fans across the world who all mourn today,” Grange said.