Miami, Florida - El Alfa El Jefe, the world's greatest dembow performer, was named to an elite group of performers who have succeeded in filling the Olympic Félix Sanchez Stadium in his native Dominican Republic to capacity after welcoming the estimated 50,000 people who attended the largest dembow festival ever held on Saturday night. 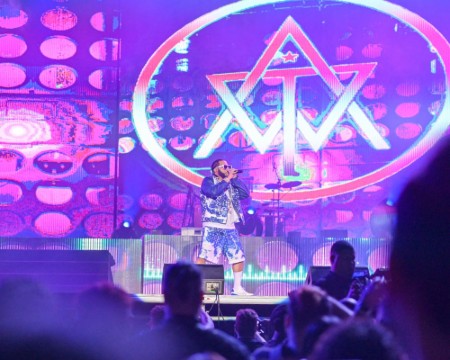 The audience at the Dominican Republic stadium enjoyed songs like "Gogo Dance," "Pamela Chu-Chu," "Suave," "Bombón," "Fulanito," "Curazao," "Bendecido," and "La Mamá de la Mamá" for three hours straight, among other successes that have allowed the artist, whose real name is Emanuel Herrera, to travel the world while playing this popularized by Dominicans rhythm.

El Alfa shared the stage with his two sons, Fendi and Enmanuel to perform "Coronao."

El Alfa was reunited with several of his national and international colleagues at the party, including J Balvin, Farruko, Secreto, Mark B, Farina, Arcángel, Braulio Fogón, Zion & Lennox, El Mayor Clásico, and Kaly Ocho, with whom he sang several of his songs.

The production, which was put on by Saymon Diaz and Eury Matos, came to an end at one in the morning with a standing ovation from the entire audience, which expressed satisfaction after three hours of listening to the greatest representative of Dominican urban music.