New York, NY - One of the most deserving men in music, Dernst “D’Mile” Emile II, celebrated huge wins last night after he walked away with several Grammys. D'Mile won in major categories for his production and songwriting on Silk Sonic’s "Leave the Door Open." It won Record of the Year, Best R&B Song and Song of the Year making it D’Mile’s historic second Song of the Year win after winning last year alongside H.E.R for "I Can’t Breathe." 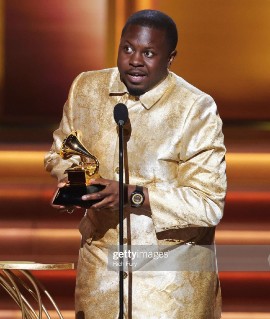 D'Mile giving a speech at the 64th Annual Grammy Awards. (Photo via Rich Fury/Getty Images)He dedicated his Song of the Year Grammy win to his mother, Haitian vocalist Yanick Étienne – a musical legend in her own right, who passed on Wednesday following her battle with cancer.

The classically trained musician/producer/singer/songwriter also took home Grammys for his contributions on Lucky Daye’s, A Seat at the Table, which won Progressive R&B Album, and for his work on H.E.R’s "Fight For You" from Judas and the Black Messiah which also earned him an Oscar in 2021.